Fumitory (Fumaria officinalis) is a herbaceous plant with an average height of 20-30 cm, up to a maximum of 50 cm that grows everywhere: meadows, fields, roads, in the plains and in the hills, but in particular abounds in the gardens and cultivated places, where it is considered a weed. It is an annual plant that blooms in spring that usually prefers areas of loose and fertile soil.

How to recognize it? Fumitory has a glabrous stem, erect or partially climbing prostrate, leaves petiolate, alternate, pale green, bipinnate, with pinnatifid, cuneiform leaves; the flowers are gathered in loose racemose inflorescences carrying over twenty flowers, which are darker pinkish-purple at the apex and vaguely resembling a sock. The fruit is a capsule: small, spherical, depressed.

As Dr. Scotti tells us in "Flora medica of the province of Como", "the fumitory has a herbaceous odor, which tastes somewhat of a soot, and a very bitter taste, which increases with drying, no longer mitigated by the parts aquee and mucilaginous grass. The name derives from the smell of smoke or soot that the rubbed grass emanates ".

About Fumitory, herbal medicine uses the dried, whole or fragmented aerial parts of Fumaria officinalis L. harvested in full bloom and containing no less than 0.4% of total alkaloids expressed as protopine. The aerial parts of the fumitory, in fact, contain about thirty alkaloids: to one of these, the protopina or fumarina, we recognize antiallergic and anti-inflammatory actions.

Many authors accept the indications of popular medicine that attribute diuretic actions
of the potassium salts fumaria, while the fumaric acid acts positively as
depurative in many skin conditions. Furthermore, the general action of the flue gas leads back to
a specific activity in the biliary tract due to the alkaloids.

Fumitory is a plant with general and deep action, such as burdock, and is frequently used in many skin disorders, such as allergic dermatitis, both for general action and in specific applications.

The proper use of the popular medicine that the plant uses in the treatment of various dermatoses could be justified by the purifying action of the fumitory and by the presence of the fumaric acid which acts positively as a purifier in many skin affections and appears, as a synthetic substance, in some medications for the treatment of psoriasis.

2) Fumitory for liver and biliary tract

Fumitory is a drainage remedy for liver and kidneys. Since time immemorial, the Fumitory has been used in the treatment of hepatobiliary disorders. It is part of the plants recommended by the German E Commission for liver and biliary tract disorders together with: Achillea millefolium aerial parts, wormwood aerial parts, artichoke leaves, milk thistle fruits, chelidonia aerial parts, turmeric rhizome, peppermint leaves and essential oil from leaves, dandelion.

The German and European Commission monograph states that the flowery aerial parts of the fumitory can be used in case of spasms of the gallbladder, biliary tract and gastro-intestinal tract.

It is a plant with an anpho-choleretic action, that is, that increases the insufficient bile flow, brakes it when it is in excess and does not act if there is no need. The ampho-coleretic action would be supported by the alkaloids present in the phytocomplex that have spasmolytic and anticholinergic action. The alkaloid protopine (majoritarian), for example, shows spasmolytic, anticholinergic and antibacterial action. Fumitory would also be effective in hepato-cholecystopathies (Geffroy et al., 1963).

Very often hepatobiliary disorders are related to headache-migraine syndromes. The changes in bile flow, in fact, are at the origin of biliary dyskinesias, habitual sources of nausea, dizziness, heaviness and pain in the right hypochondrium: Fumaria was effective in treating these hepatic migraines in 80% of cases, in average. It is above all in the migraine states that this medicine proves to be precious, also given the fact that few means are available.

The report on the applications of Fumitory in biliary surgery is interesting, both as an antispasmodic with constant action and biliary antalgic, and as a regulator of choleresis.

Roux et coll. have experimented with Fumitory in subjects suffering from chronic intestinal disorders and of biliary origin. The changes in intestinal motility in relation to the modification of choleresis and to chronicity results in the appearance of watery diarrhea if hypercoleresis and constipation are established if hyperceresis is dominant. This symptom has responded favorably to treatment with the fumitory, in a period of 3-4 weeks.

Particularly interesting, moreover, is the signaling of the beneficial activity of the plant in disorders of salivary secretion which is manifested in subjects treated with psychotropic drugs (antidepressants and neuroleptics), that is to say a decrease in the salivary secretion that accompanies, in addition to an unpleasant sensation , to consequences at the level of the mucosa, teeth and pain. The Fumitory has in fact proved to be capable of limiting the decrease in salivary secretion.

In the elderly it is useful in those cases where there is frequently a state of general digestive insufficiency due to low enzymatic secretion, inappetence, in unoperable lithiasis, and as a preventive measure to combat arteriosclerosis provided, of course, that the its use is sufficiently prolonged (J: Torlet, 1976).

Fumitory Mother tincture: how to used it 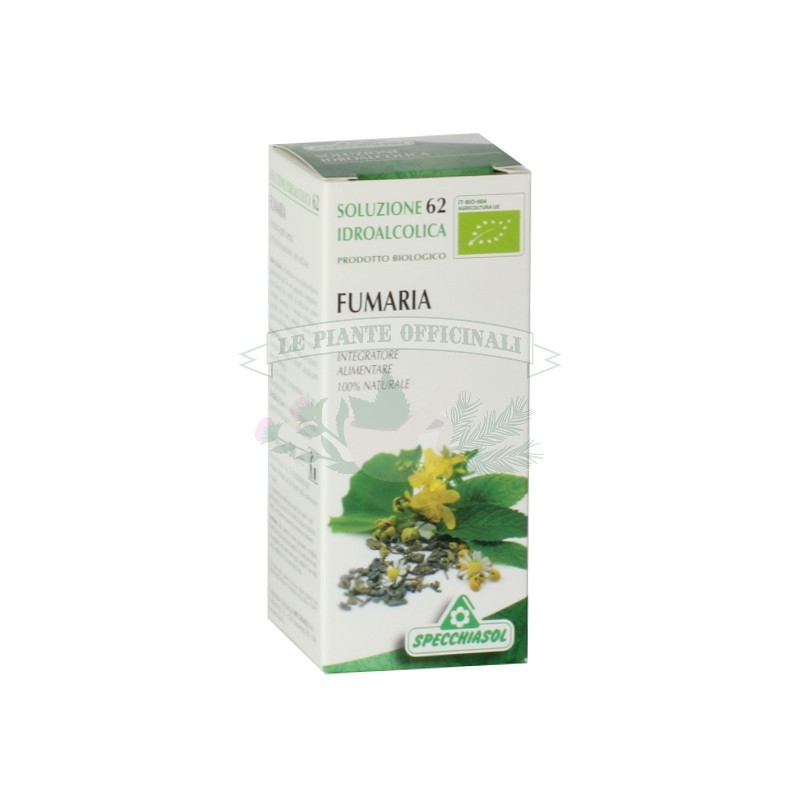 As mentioned above, Fumitory is a drainage remedy for liver and kidneys. For drainage it can also be associated with mother tincture of artichoke and dandelion. In equal parts in a single bottle, 30 drops diluted in water before meals for 20 days / 1 month.

As a dermal drainage, it is part of a preparation based on Dye-purifying Mothers of Tétau: Burdock Mother Tincture, Viola Tricolor Mother Tincture, Fumitory Mother Tincture, in equal parts until it reaches the total of 125 ml of the preparation. The choice is due to the fact that: Burdock is the typical remedy for dysfunctions even inflamed skin, tricolor violet is an ancient remedy of dermatosis and fumaria acts as a dermal drainage. Doses for adults: 50-70 drops in the morning, noon and night on an empty stomach. Dilute the product in a little water and drink in small sips held each time for about 1 minute under the tongue to favor a first absorption by the oral mucosa.

The fumitory is well tolerated and at therapeutic doses it does not show secondary effects, unless there is a particular individual sensitivity.