The horse-chestnut (or Aesculus hippocastanum L.) is a large arboreal plant, widely used also by us in parks and avenues, originating in northern Greece, Bulgaria and the Caucasus. It flowers in May, bears fruit in August and September.

Horse Chestnut: main activities and use in phytotherapy

The horse chestnut is known for its anti-edema, phlebotonic, anti-inflammatory, astringent and decongestant action. It is used in phytotherapy in case of venous-lymphatic insufficiency, capillary fragility, hemorrhoids, post-operative edema, cellulite.

According to Capasso (2005), escin has different pharmacological properties that are potentially beneficial in cases of chronic venous insufficiency: these include the anti-edema action, anti-inflammatory and venotonic. Also the flavonoids of the horse chestnut contribute to the anti-inflammatory and protective vascular action. The antiedemigene properties of escin are particularly evident in the early stages of the inflammatory process; these are the result of escin to sensitize calcium ions (reducing vascular permeability) and inhibiting the elastase and hyaluronidase enzymes that are involved in the degradation of proteoglycans (the increase in proteoglycans is associated with a strengthening of the capillary wall and prevention) of increased vascular permeability). The venotonic properties are also well documented: the venous contraction induced by escin is accompanied by an increase in local production of prostagladin F2-alpha which favors venous return (Bézanger-Beauquesne L. et al., 1990), ie a positive variation of blood flow back to the heart. Furthermore, the decreased permeability and the simultaneous increase in capillary resistance gives the horse chestnut preparations an anti-hemorrhagic action.

The preparations based on horse chestnut therefore activate the blood circulation and favor venous return by reducing lymphatic stasis. For this reason, the German E Commission, ESCOP and OMS recognize its effectiveness in alleviating the symptoms related to venous insufficiency affecting the lower limbs: pain, feeling of heavy legs, swollen legs, itching, nocturnal muscle cramps in the calf, etc. In phytotherapy, according to Chiereghin (2005) the action of the horse-chestnut is very similar to that of the melilotus and as a vasoconstrictor and favoring the venous return, the ruscus would seem more powerful (we talk about it in this post). On the other hand, the subject for the horse-chestnut bud extract is different.

For external use, horse chestnut is used in topical preparations aimed at treating pictures of venolymphatic insufficiency such as: heavy legs (for example draining legs cream), cramps, paresthesia, etc. and capillary fragility, in the treatment of hemorrhoids and varicose veins, in the treatment of myalgia, neuralgia, rheumatism (activation of blood circulation) as well as bruises, bruises, distortions. The microvasculocinetic activity also makes the plant's preparations useful in the treatment of cellulite (for example lipo-drain lift body cream, with escin) and hair loss. In dermocosmetic preparations the horse chestnut is used for the lightening, refreshing, soothing and anti-reddening properties (Proserpio) and in the treatment of couperose and acne rosacea, where it contributes to reducing the inflammatory and congestive state. You can find it for example in the cosmeceuticals Tonic and Serum Senso Lift booster.

In gemmotherapy the gems are used, which seem to be the most active part of the plant and which show that they possess a specific organotropism with respect to the venous vessels. It is also important to point out that the horse-chestnut bud extract, unlike the other galenic forms, has a lower latency time in manifesting the therapeutic response. Capillary fragility, hemorrhoids, alterations affecting the peripheral venous system (varicose veins) are the main therapeutic indications of this bud extract. 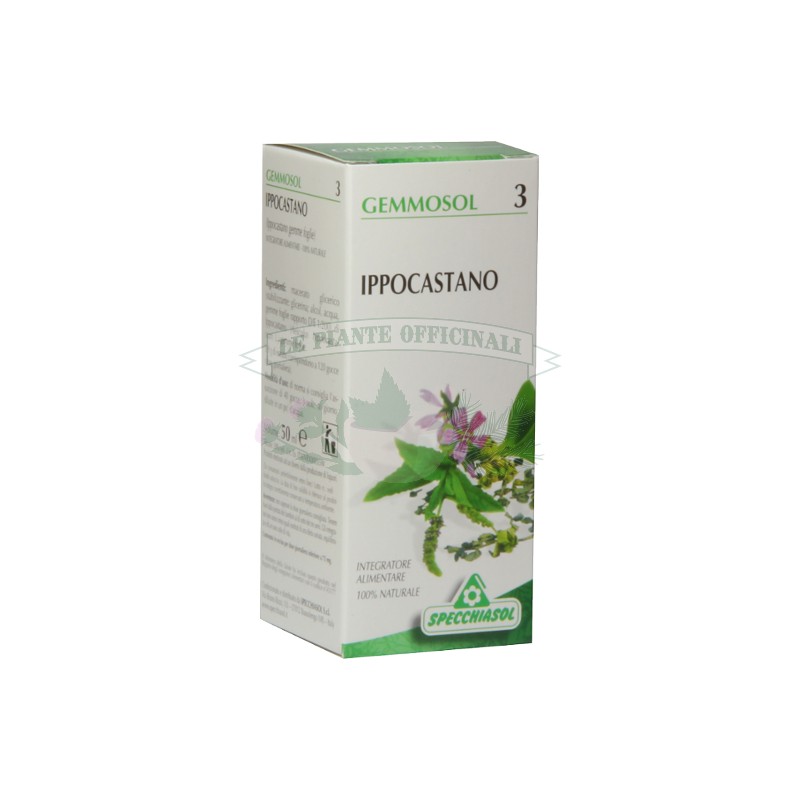 According to Dr. Chiereghin (2005) the horse-chestnut bud extract is the general remedy for "heavy legs", possibly associated or alternated with the rowan bud extract (which tones the arterial wall and fights inflammation (Tétau)) and chestnut (which acts on the lymphatic vessels and in particular on the lymphatic stasis is the most responsible of the varicose pathology, of the edema and of the annoying sensation of "heavy legs"). One must not overlook the fact that, upstream of this disorder, there is is faced with a situation of capillary fragility that must be treated thoroughly.

Here are the actions and properties of the horse-chestnut bud extract according to scientific literature:

- at the level of microcirculation there is a normalization of permeability and an increase in capillary resistance which, in addition to decreasing the fragility of the capillaries themselves, contributes to the remarkable vasoprotective, anti-exudative and anti-edema capacities of horse chestnut buds with reduction of lymphatic stasis. Since the horse-chestnut bud extract, unlike the other galenic forms, has a shorter latency time in manifesting the therapeutic response, its prescription is particularly useful for example in the treatment of haemorrhoidal crisis where it can also support classical pharmacological therapy;

- the prescription of horse-chestnut bud extract is also useful for those who suffer from muscle cramps especially at night, cases in which it is appropriate associated with Magnesium;

- a particular indication is that linked to the treatment of respiratory insufficiency of emphysematous origin in that, by improving gas exchange, it contributes to increasing tissue oxygenation. It is said that the Crusaders learned from the Turkish knights the use of the fruits of the horse chestnut boiled in water to cure the "bolsaggine" of horses, a disease caused by respiratory insufficiency of emphysematous origin. "The phlebotonic action of the remedy allows an acceleration of the pulmonary blood circulation to which is added a capillary tone action due to the reduction of the bronchial stasis, clinically objectified and with radiological examination" (Tétau, 1989).

Horse Chestnut bud extract: posology and method of use

In particular in scientific literature it is recommended to use it in association as follows: