Tinnitus is defined as the perception of an abnormal auditory sensation in the absence of external sound stimuli. The perception of tinnitus as whistling, buzzing, rustling, chattering, water splashing, wheezing, etc., is normally located in one ear or both, or "in the center" or "in the head". This localization of perception has meant that many studies have tried to identify possible anomalies of the ear as a possible cause of tinnitus.

Tinnitus what to do: 7 precious rules to get better

About 10% of the population suffers from chronic tinnitus. For about 2% the tinnitus becomes an unbearable torture, such as to generate a series of consequences that make the quality of life hardly acceptable: anxiety, isolation, fear, obsession, depression, loss of sleep, of concentration.

For these patients there is a moment in which life is divided into "before" and "after" tinnitus, when talking about it is useless because "those who don't have it" cannot understand you, when you have to decide whether to fight it means letting go or continuing to search. There are no easy solutions that a doctor can propose (drugs, surgery ..), there is no immediate treatment and catastrophic predictions are emotional and / or pecuniary traps to be avoided.

But here are 7 precious rules:

1. As long as you have to keep your tinnitus, at least keep everything else in order: physical fitness, stop smoking, take less risk: that is, improve the quality of life in other fields.

2. Avoid silence. Use a background sound as often as possible, even at night: not only to distract you and get used to it, but because it probably stimulates a part of the brain that due to hearing loss and damage to the acoustic nerve is no longer stimulated. For example, introduce a background of music or sounds of nature in the environment where you live.

3. Keep busy so as not to pay attention "not due" to tinnitus.

4. Learn what can help you relax and avoid new acoustic trauma.

5. Avoid treatments that promise to get rid of tinnitus forever: currently they do not exist.

6. You are not alone, do not feel alone: ​​help your doctor to identify the first reason of your tinnitus (emotional, somatic, sound trauma ..) and talk about your problem to family members.

7. A problem affecting the ear is a necessary but not always sufficient condition to develop chronic tinnitus: an otolaryngologist must be consulted, but together with a neurologist, a pharmacologist, an audiologist, a neuropsychiatrist: in short it is better to go to a center specializing in tinnitus!

Everyone's ultimate goal must not be learning to live with it. The goal must be to decrease the perception, and possibly the tinnitus, below the "bearable" threshold of each.

The origin of the tinnitus is complex, still not entirely clear and involves not only the peripheral auditory system (external, middle and internal ear) but also the central auditory pathways and the brain areas destined for the processing of emotions and attention.

There is a close ear-tinnitus connection. So it is that we start from the ear to the discovery of the hypothetical causes of tinnitus. From the latest research, among other things, it seems to be emerging that tinnitus could be generated in the central acoustic apparatus. Here are the main diseases that can cause tinnitus: 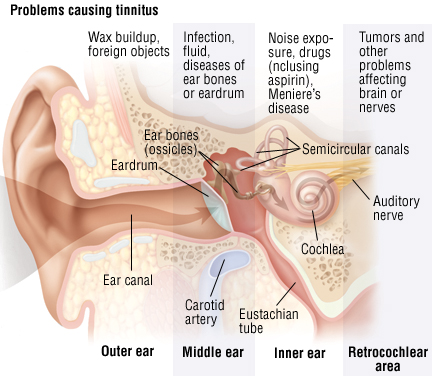 Tinnitus: what does it come from?

When we listen to a sound, the sound waves penetrate the external auditory canal of the ear and when they meet the membrane of the eardrum, with their pressure they move the chain of the ossicles, activating the cochlea. Here the sound information is translated into electrical signals of a nervous nature which are transmitted, via the acoustic nerve, to the auditory nuclei of the brainstem and to the different neural networks until they reach the auditory cortex. There are at least two afferent pathways that transmit auditory information from the cochlea to the brain and two efferent pathways of inhibition or suppression from the cortex to the periphery, which modulate the cochlear activity. Normally, in a healthy ear, the auditory centers work in a state of balance between inhibition and activation signals. The intensity of a sound depends both on the energy of the external source and on how the signal encoded by the cochlea relative to this source is modulated by the efferent inhibitory pathways.

Research in recent years has shown that tinnitus occurs when auditory nerve activity is reduced. This reduction in activity can have different causes, but mostly it is linked to a hearing loss on acute frequencies. In most cases of deafness, the ciliate cells of the cochlea are damaged and their reduced activity is reflected on the nerve fibers and on the neurons of the acoustic centers of the brainstem that are located between the cochlea and the brain. This reduced incoming signal is processed in the brain stem and then transmitted to the thalamus, the main center of reception and transmission of impulses in the brain, before it reaches the auditory cortex. If the signal coming from the cochlea is deficient, the balance between inhibition and activation is lacking. In particular, the reduced input signal, coming from the ear, translates, at the level of the auditory centers of the trunk, into a decrease in the inhibitory functions. The brain tries to compensate for the reduced input by amplifying the incoming signal but this causes an increase in auditory system activity, which results in greater activity of the auditory nerve, the auditory centers and the auditory cortex. This increase in activity is perceived by the subject as a continuous sound, tinnitus, although no signal comes from the ear.

Tinnitus in particular may appear:

- for total or partial hearing loss (eg due to trauma, aging, deafferation (damage to a group of hair cells results in reduced activation of neurons that do not receive any information));

- due to imbalance between the afferent and efferent pathways (eg due to reduction of efferent activity):

- due to abnormal stimulation of the somatosensory system, in particular that deriving from the afferents of the trigeminal nuclei and from the muscular masses of the neck and the first vertebrae. These somato-sensory afferents converge through the dorsal cochlear nucleus to the central acoustic pathways: an altered somatosensory input can modify the neuronal activity of the central auditory system.

The tinnitus signal is interpreted in the limbic system (which among other things has the role of triggering our emotional reactions!), While the adaptation processes are instead a function of the frontal cortex. The involvement of the limbic system explains not only the unpleasant emotional reaction linked to tinnitus, but also the frequency of sleep disorders, anxiety and depression in people who are affected. Moreover, stress due to other external causes, fatigue, work, physical problems, amplifies the sensation of discomfort and tinnitus discomfort.

Tinnitus: the diagnosis in steps

1. History: the specialist doctor carries out a detailed and detailed interview aimed at collecting all the clinical data necessary to hypothesize the cause of the disorder, which can be better identified by the results of the clinical examinations.

3. Audiometric examinations (tonal audiometry, impedance screening, speech audiometry, acoustic otoemissions): to investigate the auditory system in its entirety, from the most peripheral portion to the central auditory pathways.

4. Study of auditory evoked potentials (to record at the various levels of the acoustic path specific electrical responses (auditory potentials) evoked by an appropriate sound stimulus, in this way the auditory threshold is assessed objectively and allows the clear identification of the site in which the lesion located along the auditory pathway is located.

5. TEN test: to verify if there are sectors in the cochlea where the internal hair cells or the neural fibers connected to them are completely absent.

6. Acufenometria: it is an audiometric method by which it is possible to determine the tone and subjective intensity of a tinnitus.

7. Determination of the nuisance threshold: the patient is asked to report the sensation of discomfort as the intensity of the stimulus presented increases.

8. Diagnostic imaging with Nuclear Magnetic Resonance: in case tinnitus is present in a unilateral severe deafness or with severe bending mainly localized on the acute frequencies.

Visit our herbal department, contact us for any clarification or for more information.