Home > Blog list > Menopause: natural remedies and secrets not to be missed

Menopause: natural remedies and secrets not to be missed

The term menopause means the cessation of spontaneous menstruation. Although the cessation of menstruation is a natural occurrence, hormonal alterations lead to the appearance of symptoms (hot flashes, sweating, vaginal dryness, irritability and depression) that are devastating for some women. These episodes can last from a few seconds to 20 minutes and can occur rarely or more than 10 times a day. Some women wake up suddenly wet with sweat or suffer from insomnia. Such sensations can be stimulated by a warm environment, alcohol, caffeine, stress, exercise and spicy foods.

The phase preceding the menopause is the peri-menopause (transition from the reproductive to the non-reproductive phase), while the phase that follows it is post-menopause. It is estimated that about 75-85% of women, during the menopause and / or menopause, complain of hot flashes and sweating, especially in the upper body and on the face and about 33% of women who experience such symptoms require medical care. Vaginal dryness and variations in sexual desire are among the major consequences of the diminished estrogen secretion that occurs at this time in a woman's life.

What are the plants that combat menopausal disorders?

The classic gynecological medicinal plants are those emmenagogues, that is equipped with active ingredients that increase the quantity and duration of menstrual flow when it is scarce and promote it if it is absent. Plants with emmenagogue activities are those rich in essential oils (such as rue, rosemary, parsley). The German E Commission recommends the use of chalcocasto and cimifuga for typical symptoms of menopause. The potentilla and the cimifuga are specifically mentioned for the treatment of dysmenorrhea; the lynx of virginia to relieve tension and breast pain. The Sage officinale can also not be cited: sage is rich in enzymes, vitamin B1 and C, and flavonoids, in particular isoflavones, which have an action similar to estrogens. Thanks to the presence of these elements - which help to rebalance the hormonal system - the sage has a positive effect in relieving hot flashes (thanks to its action on the regularity of the sweating process), and in acting on the disorders of anxiety and mood of typical menopause. It can also be used in case of water retention and migraines, especially if caused by cycle or menopause; to this, we add the usefulness of sage in favoring the digestive function and the elimination of intestinal gas.

Hormone therapy is generally used to relieve the symptoms of menopause, although it is linked to a series of negative health effects, in particular cardiovascular problems and risk of breast cancer, but recently published studies show how some plant-based therapies can play a role important in reducing these symptoms.

In an article published in the journal "farmacista33" in 2016, Taulant Muka, a researcher in general practice at the Erasmus University Medical Center in Rotterdam, Holland, said: "Soy extracts contain isoflavones, substances with estrogenic-like activity that can influence the secretion and metabolism of sex hormones ", but after conducting a meta-analysis on over 60 randomized trials (which evaluated plant-based therapies and the presence of hot flashes, night sweats and vaginal dryness out of a total of 6,653 women ), he concluded: "The collected data suggest that phytoestrogens are linked to a drop in flushing and vaginal dryness, but not from night sweats, while several herbal remedies are related to a reduction in the frequency of vasomotor symptoms".

After numerous studies and tests, the BioDue Laboratories have patented a Salvia extract, producing Psyche LiberaVAMP, enhanced with the Griffonia titled extract, in order to tackle the menopause problems with a multi-functional approach.

Psyche LiberaVAMP goes to work thanks to Griffonia on the mood and, thanks to the standardized extract standardized by Salvia, it regulates the process of sweating and to counteract the menopausal disorders.

It contrasts, regulates, deflates, and has been subjected to a triple extraction process. 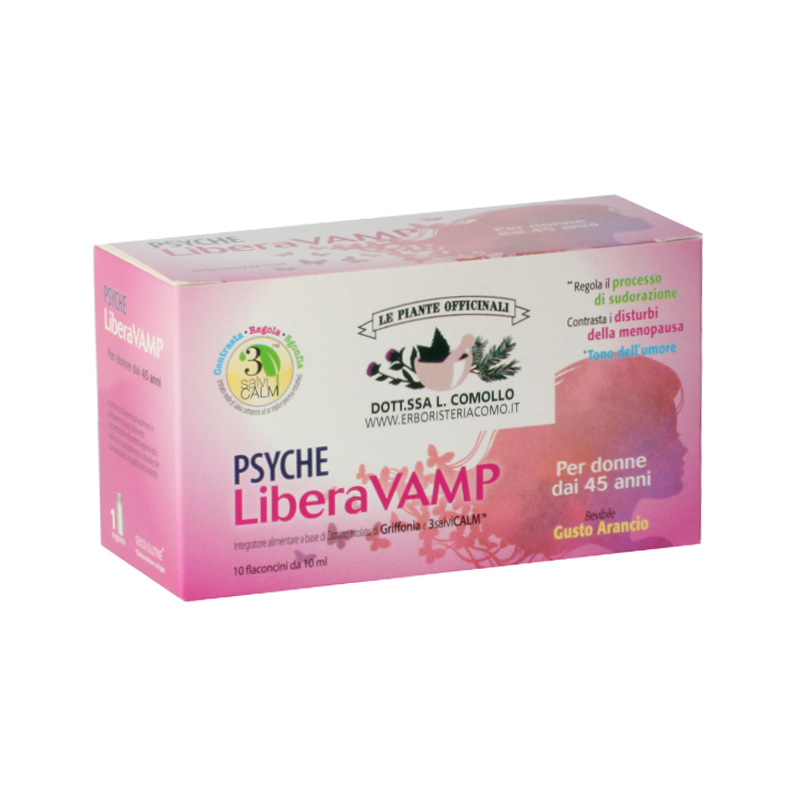 What other changes occur with menopause?

The sudden decline in the production of estrogens, together with the effects of aging and photo aging of the skin, cause consequences on the appearance and health of the skin and skin appendages, which undergo structural alterations that are not irrelevant.

Redness in the face and dryness of the skin are the first visible signs. The epidermis thins, is unable to retain water and significantly reduces the production of sebum. The result is a dehydrated, rough skin with an altered barrier function: the skin, now more vulnerable, becomes more susceptible to external environmental and chemical agents; they could also worsen existing conditions (sensitive skin, couperose) or introduce new ones. Collagen is significantly reduced, the skin loses its tone and elasticity. Wrinkles are accentuated, facial muscles are relaxed and there is a progressive loss of the oval of the face. Among the late symptoms, atrophy and dryness of the mucous membranes and alterations of the appendages must be mentioned: thinning of the hair, thickened, striated and brittle nails.

In our PhytoCosmesis department, you can find the cometic bio Domus Olea Toscana that help prevent skin aging, repair superficial skin lesions, perform an antibacterial and anti-inflammatory function, without having the contraindications of a drug.

Domus Olea Toscana has produced its cosmeceutical line using raw materials Bio (primarily the olive tree) which give the products a high anti-radical and antioxidant activity and has availed itself of the collaboration of the Scientific and Technological Pole of the University of Florence to develop and test the entire line (olive leaf, or "anti age" par excellence, it strengthens and drains lift, sebum lift, and "eleven" for cleansing, care and nutristyling of the hair). 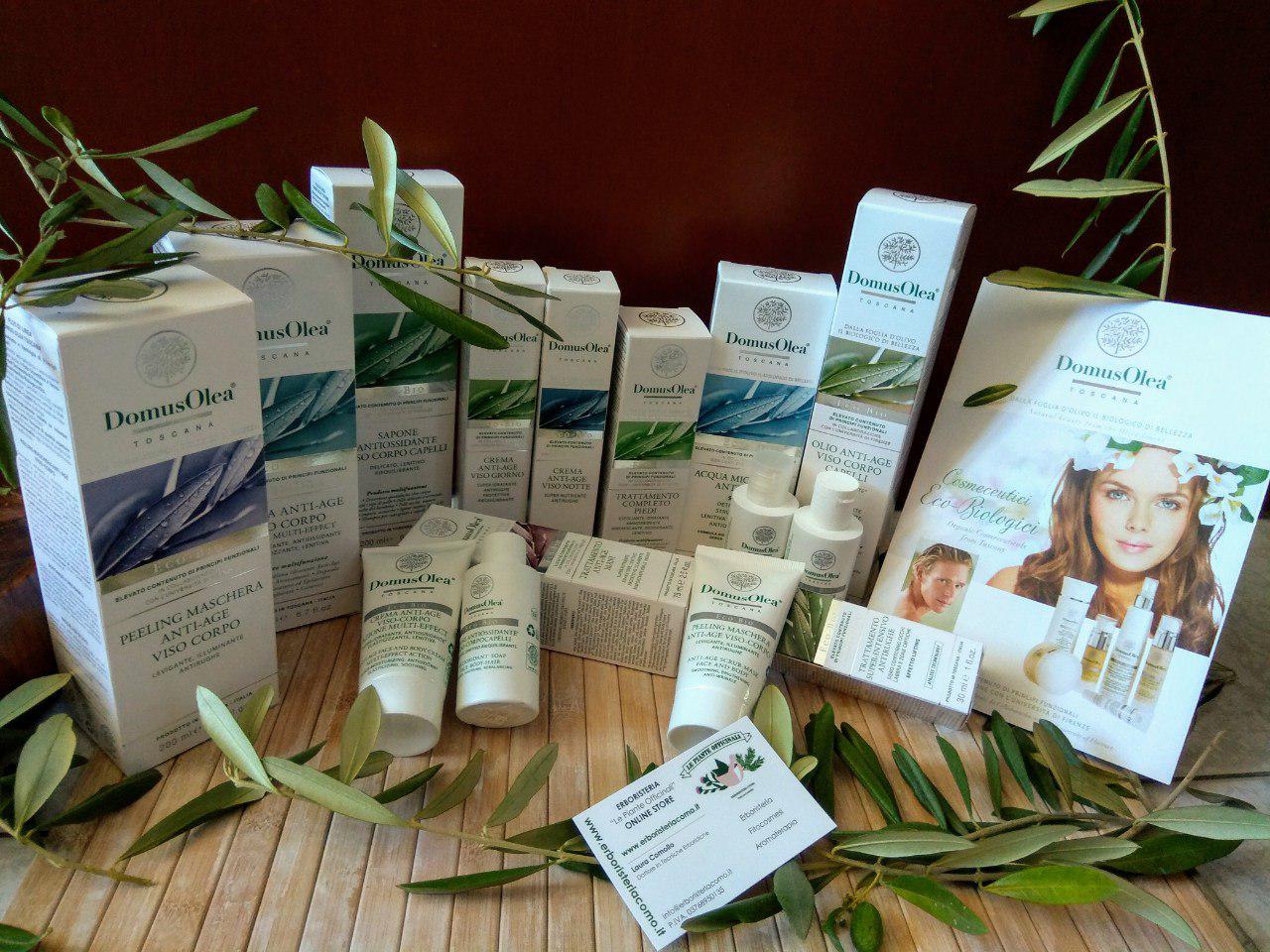 Visit our herbal department or contact us for any clarification or for more information.