Psyllium seeds: properties beneficials and use

Psyllium is given from the ripe, peeled and dried whole seeds of Plantago afra (Plantago psyllium L.) or Plantago indica (Plantago arenaria Waldstein and Kitaibel), commercially known as Spanish or French psyllium seeds (or black psyllium), or of P. ovata Forskal, known commercially as blond or Indian psyllium. 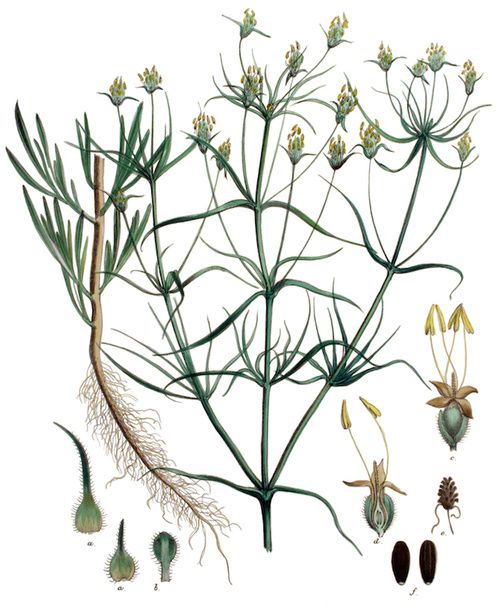 Plantago psyllium and P. arenaria are annual herbaceous plants with reduced or shortened caule, narrow, long and curved leaves, white flowers in numerous cylindrical ears and fruits in capsules, which when ripe release brownish-yellow seeds. The seeds have a mucilaginous coating, which in contact with boiling water expands due to the high content of mucilage (10-30%). The German Commission E reports that the swelling index should not be less than 10; the swelling effect that derives from it makes the stool soft and stimulates peristalsis. Plantago ovata is instead similar to the plants previously described but with long leaves and more modest flower spikes. The thin surface layer that covers the seeds is called ispagula, which thanks to its mucilage content (25-30%), can adsorb water for 25 times its weight.

Psyllium seeds: what they contain

Psyllium fiber is resistant to digestion in the upper intestinal tract, so it is not absorbed. Part of this fiber is degraded by colon bacteria.

A characteristic of psyllium is to improve the weight and consistency of the fecal mass, both in constipation and in diarrhea. Furthermore, psyllium lengthens the transit time when it is short (in diarrhea) and shortens it when it is long (in constipation), further contributing to normalizing the intestinal transit of the faecal mass. In constipation, in particular, psyllium by retaining water in the intestinal lumen prevents the excessive absorption of liquids along the entire colon. Under these conditions the fecal mass is more hydrated, increases the volume and therefore accelerates the transit, ultimately reducing the time available for the reabsorption of the fluid. Psyllium has also been used in the treatment of irritable bowel syndrome and ulcerative colitis.

Here are the properties of Psyllium seeds in detail:

- laxative effect: psyllium seeds binds to liquids increasing the volume of the intestinal contents and therefore the weight of the fecal mass, which in turn stimulates the intestine. The endoluminal pressure is reduced with a consequent acceleration of the colonic transit. Psyllium seeds increase the weight of the feces and their content in water by means of the fibrous residues, the water that has linked to these residues and the increased bacterial fecal mass.

- antidiarrheal effect: in cases of diarrhea, psyllium seeds binds to liquids increasing the viscosity of the intestinal contents and normalizing the transit time and the frequency of defecation.

- metabolic effects: psyllium seeds significantly lowers serum cholesterol (5-15%) and LDL cholesterol (8-20%) levels in hypercholesterolemic subjects without significant changes in HDL cholesterol or triglycerides. The mechanism of this effect is still under study, but a possible explanation is the increased fecal excretion of bile acids which, in turn, results in further synthesis of bile salts starting from cholesterol. In addition, psyllium seeds reduce blood sugar spikes by delaying the intestinal absorption of sugar.

- in the treatment of occasional and atonic and spastic constipation;

- in the symptomatic adjuvant therapy in cases of diarrhea due to various causes.

Psyllium seeds: use, dosage, where to find them

The daily dose of Psyllium seeds or equivalent preparations recommended for adults and children over 12 years of age by the German Commission E and ESCOP is 10-30 gr; in cases of diarrhea up to 40 g per day divided into 2-3 doses. For children from 6 to 12 years: as a laxative, half the dose compared to adults.

Psyllium is administered orally and it is very important to take the seeds with abundant liquids, for example in the following way: pour about 5 g in 150 ml of water, mix vigorously and drink quickly, then maintain adequate fluid intake.

Psyllium, according to ESCOP, should preferably be taken with meals, while it is to be avoided the intake immediately before bedtime. Any other medicine should be taken at least 30-60 minutes before psyllium seeds to avoid delay in absorption. If diarrhea lasts longer than 3 days, consult a doctor to ascertain the cause of the disorder.

You can find Psyllium seeds in herbal medicine and in many food stores. In Erboristeria Como we offer PsylliumSel  to help regulate intestinal transit and contains Psyllium seeds in powder, gluten-free and added sugars: PsylliumSel (Psyllium sachets), easy to take, find it here. 1 to 3-4 sachets of PsylliumSel can be taken per day preferably between meals. Taking the product in the evening is not recommended. Do not exceed the recommended daily dose. Alternatively, a product that could be useful and that you can find here, always based on Psyllium seeds is Cotipsillium kinetic sachets, of Specchiasol, in which psyllium associated with an extract with prokinetic activity such as ginger, with a calibrated digestive enzyme pool and plenty of water creates the condition of a rapid, healthy and lasting improvement of intestinal activity, thus reducing gastrointestinal heaviness and the formation of intestinal gas.

Taking Psyllium seeds without an adequate amount of liquids can cause it to swell resulting in blockage of the throat or esophagus and possible suffocation. In addition, insufficient fluid intake could cause intestinal obstruction.

In cases of diarrhea, adequate water and electrolyte intake is important.

There is no restriction on the use of Psyllium in pregnancy and breastfeeding: there are no risks since the components of the product are not absorbed and have no systemic effects.

The enteric absorption of mineral salts (e.g. calcium, iron, lithium, zinc), vitamins (B12), cardiac glycosides and coumarin derivatives administered simultaneously with the product may be delayed. For this reason, any other medicines should be taken at least 30-60 minutes before psyllium seeds. in case of insulin-dependent diabetes it may be necessary to reduce the insulin dose.

Psyllium seeds are contraindicated in children under the age of 6 years and in case of known hypersensitivity to psyllium seeds.

The intake of psyllium seeds by patients with the following disorders must be under medical supervision: faecal impacts, undiagnosed abdominal symptoms, a sudden change in bowel habits for more than 2 weeks, rectal bleeding, inability to defecate following use of a laxative, abnormal constrictions of the gastrointestinal tract, potential or existing intestinal obstruction (ileus), pathologies of the esophagus and cardias, megacolon, diabetes myellitus difficult to control, patients treated with cholesterol lowering agents.

Regarding the undesirable effects, the psyllium seeds could cause flatulence which usually disappears during the treatment. Taking the product could cause abdominal swelling, risk of esophageal or intestinal obstruction and faecal impacts, especially if the seeds are ingested without an adequate amount of fluids.

An overdose can cause minor ailments, such as feeling of abdominal discomfort and flatulence, and more serious such as intestinal obstruction. Adequate fluid intake must be maintained and treatment should be symptomatic.