Turmeric benefits: an aid from nature

Turmeric and its role in chronic inflammation

The genus Turmeric Longa belongs to the family of the Zingiberaceae, which includes plants with rhizomes that represent the underground part of the stem of the plant. According to the ESCOP, the rhizome turmeric is to be used in the symptomatic treatment of mild digestive disorders and minor biliary dysfunctions. Turmeric has choleretic, anti-inflammatory, antioxidant, hepatoprotective, hypolipidemic and anti-tumor effects.

Turmeric Longa and its active compounds, the curcuminoids, have become extremely topical since it became clear that most of the chronic diseases of our century are due to the chronic inflammation caused by numerous acute and chronic infections. At the beginning of the century, special interest was given to the COX-2 cyclooxygenase inflammatory enzymes that are overexpressed in numerous malignant tumors.

Today we also know that chronic inflammation of low grade, or silent, persistent after many years can lead to chronic degenerative diseases and cancer and promote its evolution.

In certain pathological conditions, curcuminoids, unlike drugs, allow to reduce and improve the symptoms without causing significant side effects.

Turmeric has great advantages but has a poor bioavailability

The extracts of Curcuma longa are represented by the curcuminoids of which curcumin (which makes up 95-97% of the curcuminoids) is the most active form in modulating the inflammatory signals and cell proliferation. Despite the numerous proven properties and the recognized safety profile, Curcuma's therapeutic activity is only possible at high doses. The poor bioavailability is essentially attributable to poor intestinal absorption because turmeric is unstable at physiological pH and rapid metabolization. To increase the bioavailability of the compound, numerous strategies are used, including the complexation of curcumin with phospholipids, or other lipid carriers. In the phytosome there is an interaction between the active ingredient (curcumin) and the polar head of the phospholipid so as to be an integral part of the membrane. The new molecular entity thus formed improves the bioavailability of the active ingredient and allows its use at low doses. Thus, the phytosome of curcumin has systemic levels significantly higher than the curcumin not complexed with an increase in bioavailability of about 30 times.

Where can we find turmeric in an easily assimilated state? 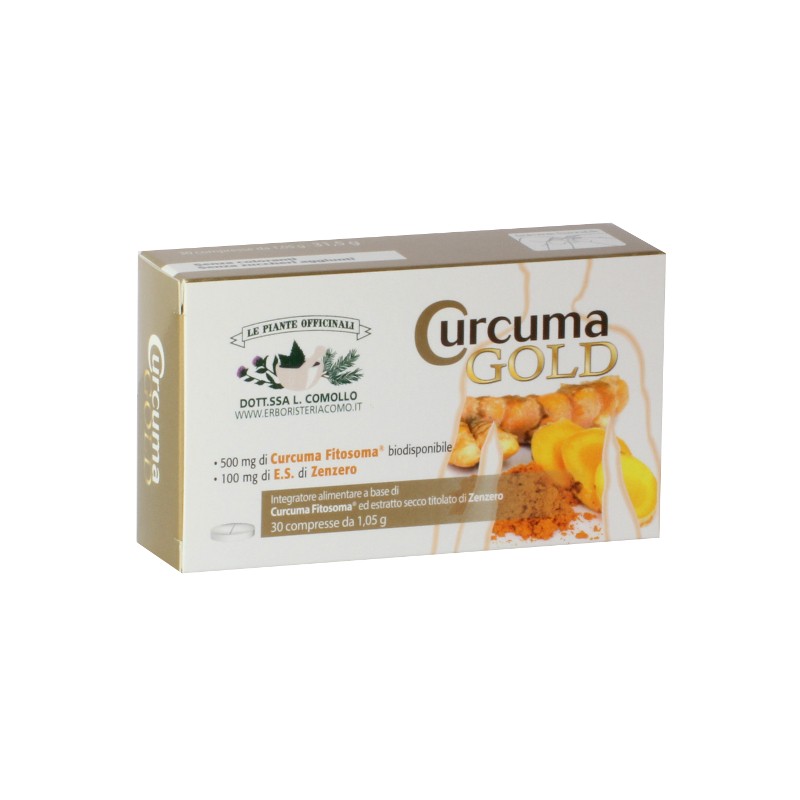 - Turmeric and digestive system: the protective effect of Curcuma extract on the liver, from toxic substances such as alcohol, has been the subject of numerous studies. Other clinical studies have shown the positive effect of turmeric on patients suffering from colitis and irritable bowel syndrome, improving quality of life after two months and reducing abdominal pain. Thanks to the synergy with ginger, the digestive and hepatic efficacy of Curcuma Fitosoma has been enhanced. To benefit from it, we recommend taking 2 tablets a day for at least two months.

In rheumatoid arthritis, chronic autoimmune disease, curcumin inhibits those molecular signals that promote joint inflammation and destruction but are also involved in neoplastic pathology: it has an activity similar to anti-TNF drugs but without their side effects and is able to reduce C-reactive protein. Curcumin is also effective in relieving chronic pain including neuropathic pain.

In osteoarthritis, curcumin counteracts the effects of the inflammatory molecules that are responsible for the destruction of the cartilage, determines the reduction of pain and an improvement in the motility of the affected joints. From a study by Panachi et al. (2015) shows that in the presence of curcuminoids, oxidative stress is significantly reduced, which is a determinant of the degradation of the extracellular matrix and increases the serum levels of the antioxidant enzymes. The antihyperalgesic effect of curcumin can be attributed to blocking the activation of the capsaicin receptor receptor, involved in pain control (Yeon et al., 2010).

A clinical study of 2015 by Rapacioli et al. highlighted the activity of Curcuma phytosome® against acute pain showing that the daily intake of 4 tablets of Curcuma Fitosoma® is comparable to the therapeutic dosage of paracetamol but with side effects (gastric tolerability) significantly lower. We recommend the association with Doloreum, useful for joint functionality, to enhance its action.

- Turmeric and prostate: In recent experimental work, it appears that curcumin is effective in non-bacterial chronic prostatitis. The mechanism of action can be attributed to the decrease of some pro-inflammatory cytokines TNFalpha in the blood and in the tissues and to inhibition of the COX-2 cyclooxygenase (Zhang et al., 2010); According to Kim (2013) pro-inflammatory cytokines secreted by macrophages in the presence of prostatic inflammation, they stimulate hyperplastic prostatic growth for hyper-regulation of the HIF-1 alpha factor that is inhibited by curcumin. in experimental studies, curcumin reduces the weight and volume of the prostate gland so much that Kim et al. (2015) support its usefulness in the treatment of benign prostatic hypertrophy (blog.). The administration of Curcuma fitosoma® in patients with benign prostatic hypertrophy reduces the symptoms of the disease. Synergistically associating Curcuma Gold with Prostapygeum will enhance the effect.

- Turmeric and Diabetes: a recent study by Zhang et al 2013 stated that curcumin could positively influence most of the key aspects of diabetes, insulin resistance, hyperglycemia, hyperlipidemia. In addition, curcumin has been shown to be effective in reducing liver disorders associated with diabetes, such as "fatty liver" and modulating diabetic neuropathy. To get results on diabetes with Curcuma Gold it is advisable to take it for at least 6 months without interruption. In addition, a new clinical study of 38 diabetic patients confirmed the efficacy of Curcuma Fitosoma in diabetic retinopathy, glaucoma and dry eye syndrome, in the dosage of 2 tablets per day for 2 months.

Turmeric, with the numerous molecular mechanisms of its many active compounds, is the subject of attention for the prevention but also for the therapy of osteoarticular diseases, of the metabolic syndrome, and for the treatment of degenerative and tumor diseases that recognize the inflammation base chronic. To be assimilated, however, it is necessary to use it in a liposomal form.