Butcher's broom in herbal medicine: what is it and what does it contain?

When we name butcher's broom in herbal medicine, we mean the plant of Ruscus aculeatus L., and we herbalists of the butcher's broom use the rhizome, whose main active ingredients are ruscogenins (steroid saponins).

The Butcher's Broom is a perennial and dioecious plant 30-40 cm high and grows spontaneously in the woods and undergrowth throughout Europe. It has a rhizome and one or more erect stems bearing numerous flattened cauli which look like leaves; the fruit is a red berry which gives the plant a decorative aspect. It is absolutely not to be confused with holly (Ilex aquifolium). 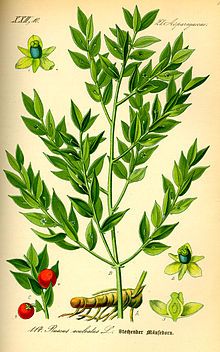 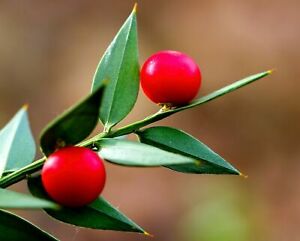 Butcher's Broom: when to recommend it for use

What is chronic venous insufficiency? it is a condition in which the veins do not favor the return of blood flow and therefore the blood tends to stagnate in the tissues; this situation most often occurs in the veins of the lower extremities. Chronic venous insufficiency can be caused either by real pathologies of the veins (varices, outcomes of venous thrombosis, etc.) or by a functional overload of the veins which, although normal, are called to excessive work. One of the most common manifestations of chronic insufficiency is varicose (varicose) veins, although chronic venous insufficiency can occur without varicose veins or noticeable capillaries. Varicose veins are the result of the proteoglycan network in the elastic tissue of the venous wall by lysosomal enzymes; this would facilitate the escape of electrolytes, fluid and proteins through the vessel wall and the formation of edema; there is also a reduction of collagen, a dilation of the vessel wall and alterations of the microcirculation with consequent venous stasis.

All known properties of Rusco in scientific literature

According to F. Caujolle "the butcher's broom is perhaps the most powerful natural vasoconstrictor known", with a marked phlebotonic action superior to that of the horse chestnut. According to Capasso, in "Phytotherapy" (2005):

- butcher's broom inhibits the increase in the permeability of the venous bed experimentally induced by agents such as bradykinin, leukotriene B4 and histamine;
- both the drug (the rhizome) and the ruscogenin (active ingredient) cause vasoconstriction of the venules without appreciably affecting the arterioles. The vascular effects of saponins are believed to be due, at least in part, to the blocking of alpha-adrenergic receptors and calcium channels on venous smooth muscle cells;
- unlike horse chestnut, butcher's broom also has anti-elastase activity, while it has a slight effect on hyaluronidase;
- butcher's broom possesses astringent and anti-inflammatory properties that can be of benefit in the case of chronic venous insufficiency;

Also the ESCOP cites, in the monograph of Rusco, studies conducted in vitro and in vivo, in particular on its vasoconstrictive and vasoprotective properties and a collection of countless clinical studies on chronic venous insufficiency and varices. R. Weiss (1992) also points out that butcher's broom acts effectively in anorectal syndromes and in particular in haemorrhoids, where we see the decongestion of haemorrhoidal nodules that "deflate" bringing relief to the patient. Rusco also has diuretic activity (already reported by Dioscorides!) So it is also useful for those with water retention problems, as well as edema and venous insufficiency. Dr. Valnet also indicates it for menopausal disorders, premenstrual pain and painful menstruation.

Butcher's broom can be associated with other vascular tropic plants (sweet clover, witch hazel, horse chestnut, red vine, ..). As far as gem therapy is concerned, Bruno Brigo and Dr. Campanini would identify among the bud extracts ​​of choice for a possible synergism with the butcher's broom the gemmoderivati ​​of rowan, chestnut, horse chestnut.

Rusco: what we have selected!

As for the treatment of hemorrhoids Fitoproct is our supplement, to be associated if needed with the medical device external hemorrhoid cream, based on phytocomplexes of butcher's broom and bilberry such as Rusco Compound plus and chestnut.

ALL RIGHTS RESERVED, THIS TEXT CANNOT BE REPRODUCED WITHOUT THE EXPRESS AUTHORIZATION OF ERBORISTERIACOMO.IT

The information contained on this site is presented for informational purposes only, in no case can they constitute the formulation of a diagnosis or the prescription of a treatment, and are not intended and must not in any way replace the direct doctor-patient relationship or the specialist visit. . It is recommended to always seek the advice of your doctor and / or specialists regarding any indication reported.

If you want to learn more about our remedies for swollen and heavy legs, read here.

If you want to learn more about our natural remedies for hemorrhoids, read here.

How to improve circulation: metabolic syndrome and natural remedies