Bud Extracts ​​what they are and how to use them

The raw material must be harvested precisely at the vegetative restart, when it has not yet differentiated, but is richer in lymph, tissues and substances, even hormonal, which then will no longer be found in the adult plant.

We are the opposite of classical phytotherapy: in the gemmoderivato we have, at least to a prevalent or characterizing, flavones, tannins, alkaloids, sometimes even chlorophyll, but glucides, auxins, cytokinins, gibberellins, a material characterized by a great energetic potential that will give, then , place with leaves, flowers, but also with woods, stems! Think of a bud of lime or horse chestnut that, formed in the autumn, passed to the dormant bud state throughout the winter, will then give a long branch even more than a meter that then will bring dozens of leaves, clusters of flowers and fruits . Well, all these potentialities are present in the gem formed at the end of autumn, but that, as a gem, will not contain the substances present in the adult stage and not even those present in the medicinal parts of the species used by classical herbal medicine.

What a gem contains

The gem can be considered as a source of cells: it is made up of the meristematic tissue, which has the task of building thousands of plant cells essential for the growth and full development of the plant. In the embryonic tissues there are tissue biostimulins (or growth factors) that control and regulate their harmonious development. In the buds there are also amino acids (in particular arginine, proline, alanine), mineral substances, trace elements, enzymes, vitamins and important concentrations of flavonoids.

The presence of biostimulins determines an important part of the therapeutic properties of gemmotherapeutics. As early as 1945, Filatov wrote: "Every human, animal or plant tissue, maintained in a state of survival, but placed in conditions of suffering, reacts by defending itself with the production of special resistance substances (biogenic stimulators or biostimulins) which, introduced to them in a living human, animal or plant organism, it reactivates the vital organic processes improving its defensive potential towards morbid alterations ".

How to make Bud Extracts

Currently there are 55 glyceric macerates (M.G.) and each exhibit an elective action towards some organs or apparatuses.

Most laboratories starting from macerated-mother or macerated glycerine (MG) implements a mixture of water, alcohol and glycerine with a subsequent dilution to the first hahnemannian decimal (1DH): a part of the base preparation (MG) is diluted with 9 parts of a mixture containing 50 parts by weight of glycerine, 30 parts of alcohol and 20 parts of water. The whole is subjected to stirring to optimally mix the preparation. The alcohol level commonly reached is 38 °. What is obtained represents a solution 10 times more diluted compared to the macerated base. This preparation is defined as glyceric macerate (M.G.) to the first hahnemannian decimal (1DH) or M.G.1DH, commonly known as "gemmoderivato".

The concentration at the first decimal hahnemannian ensures, from the clinical point of view, a therapeutic optimum: "This dilution at 1/10 °, the first decimal hahnemannian, is the pharmaceutical form of the gemmotherapeutic remedies. And it is the only form that must be prescribed, since it has the highest activity and especially the most constant "(Tétau M., Gemmotherapy new clinical studies, IPSA, Palermo 1989, p.13).

The first investigations related to the composition of gemmoderivati ​​belong to Professor Netien and concern the buds of Ribes nigrum, while in Ramussent (1972) and Didry (1977) we owe the study on the variations of the active ingredients of Rosmarinus officinalis during the various phases of growth. The chromatographic study allowed us to isolate and quantify the different percentage of active ingredients present in the various species of the same plant and to compare the composition of the active ingredients among the plant tissues in their different stages of maturation. Analytical study involved the chemical analysis of gems and the analysis of the difference in chemical structure between the adult plant and the gem.

Several studies have been undertaken, over the years, aimed at verifying the therapeutic validity of gemmoderivati. In addition to the stimulating effect of Betula pubescens on the reticuloendothelial system (Halpern test), the anti-inflammatory activity of Ribes nigrum and Sequoia gigantea have also been demonstrated.
sedative of Tilia tomentosa, the action on the cardiovascular system of Crataegus oxyacantha and the hypotensive activity of European Olea.

In the study of gemmotherapy it is clear that gemmoderivati ​​can be an important tool in preventing and combating cellular aging processes. Tétau writes: "The gem, since it is the youngest part of the plant, because it contains all the substances that allow a young plant organism to self-generate, comes to have an action of regeneration, renewal and anti-aging on the organism 'animal human '(Tétau M., Scimeca D., op.cit., p.52). Embryonic tissues therefore have the potential to help the cells of our body to repair failures due to oxidative stress, for example: this intuition seems confirmed by the warning concerning the antiradical properties of young jets of Rosmarinus officinalis (see post). Also the buds of Ribes nigrum, rich in vitamin C, show an important antioxidative action.

Thanks to the richness and variety of the biochemical processes that take place in the gem, which has a considerable energy potential due to the presence of hormones, flavonoids and peptides, principles endowed with properties that stimulate cellular metabolism and allow the bud to get to bloom, the attention of pharmacologists as well as cosmetologists has focused on this moment of plant life, in order to derive the so-called "gemmoderivati" to be used, as well as in clinical-medical practice, also in phytocosmetics. Among the first gemmoderivati ​​used in cosmetics, in addition to Beech and Horse-chestnut, should be noted those of Almond (Prunus amygdalus Stok.), Rosa canina (Rosa canina L.) and Tiglio (Tilia tomentosa Moench.), Which are found in cosmetics a valid and safe application, as they promote the maintenance of an ideal "skin homeostasis" and therefore help the skin, as delicate "phytostimulators", to remain in good physiological conditions (Proserpio G., 1995).

Therefore, the gems seem to constitute, in cosmetics, a concentrate of phytostimulins, that is of substances in their native state, which promote tissue stimulation, both vegetal and animal, without altering the physiological balance of the skin.

For adults, the average dosage of a gemmoderivato (MG1DH) is 50 drops diluted in water, 1-2 times a day, generally 15 minutes before the main meals, for at least 20 days a month for one or more months, to depending on the pathology to be treated and the medical judgment. The amount of water recommended to dilute the drops is generally half a glass. It is a good idea to recommend to keep in the mouth for about one minute or to sip slowly in order to promote optimal absorption.

In the pediatric area the administration of gemmoderivati ​​will be started after 2 years of age due to the presence of alcohol and glycerine. The recommended dosage in children under 6 years of age is 1 drop per kilo (weight of the child), 1-2 times a day. After 6 years, more generally we recommend 20-40 drops, always diluted in water, 1-2 times a day. The prescription will be continued for 20 days a month for one or more months, depending on the pathology to be treated and the medical judgment. Also in this case it is advisable to administer slowly in small sips to ensure maximum absorption. It is possible to add honey (or sugar) if the baby does not like the taste.

Advice on how to use Bud Extracts in Synergism.

It is a good idea, as Tétau emphasizes, not to associate in the same bottle both more gemmoderivati ​​and gemmoderivati ​​with dyes, essential oils etc., as it can create alterations from the pharmacological point of view: "[...] all these gems must be prescribed in bottles separated. Their association in the same bottle it risks causing internal pharmacological reactions that can modify or alter their therapeutic properties "(Tétau M., op cit cit., IPSA, Palermo 1989, page 14).

This concept was recently reaffirmed by the author (2005). The same opinion is given by Brigo: "Preference of single or combined gemmoderivatives is preferable, but not in the same administration (separate bottles)" (Brigo B., op.cit., 1997, p.36). It is possible, however, to mix the gemmoderivati ​​in the same glass with water "extemporaneously" immediately before the intake.

How to store Bud Extracts

The conservation of gemmoderivati ​​follows the rules established by the French Pharmacopoeia: preservation in the cool, protected from light and therefore in tightly closed dark bottles. They can not be used after 5 years have passed since manufacture.

100 g of gemmoderivato contain only 0.5 g of dried plant.

However, remember that the gemmoderivato is not prepared from the parts considered officinal of the plant as for all other galenic forms, but from buds or young jets: not linden "flowers with bracts", but linden "buds", not rose "flowers" or "rosehips", but "young jets"; and that the active substances present are very different as the actions are often different. 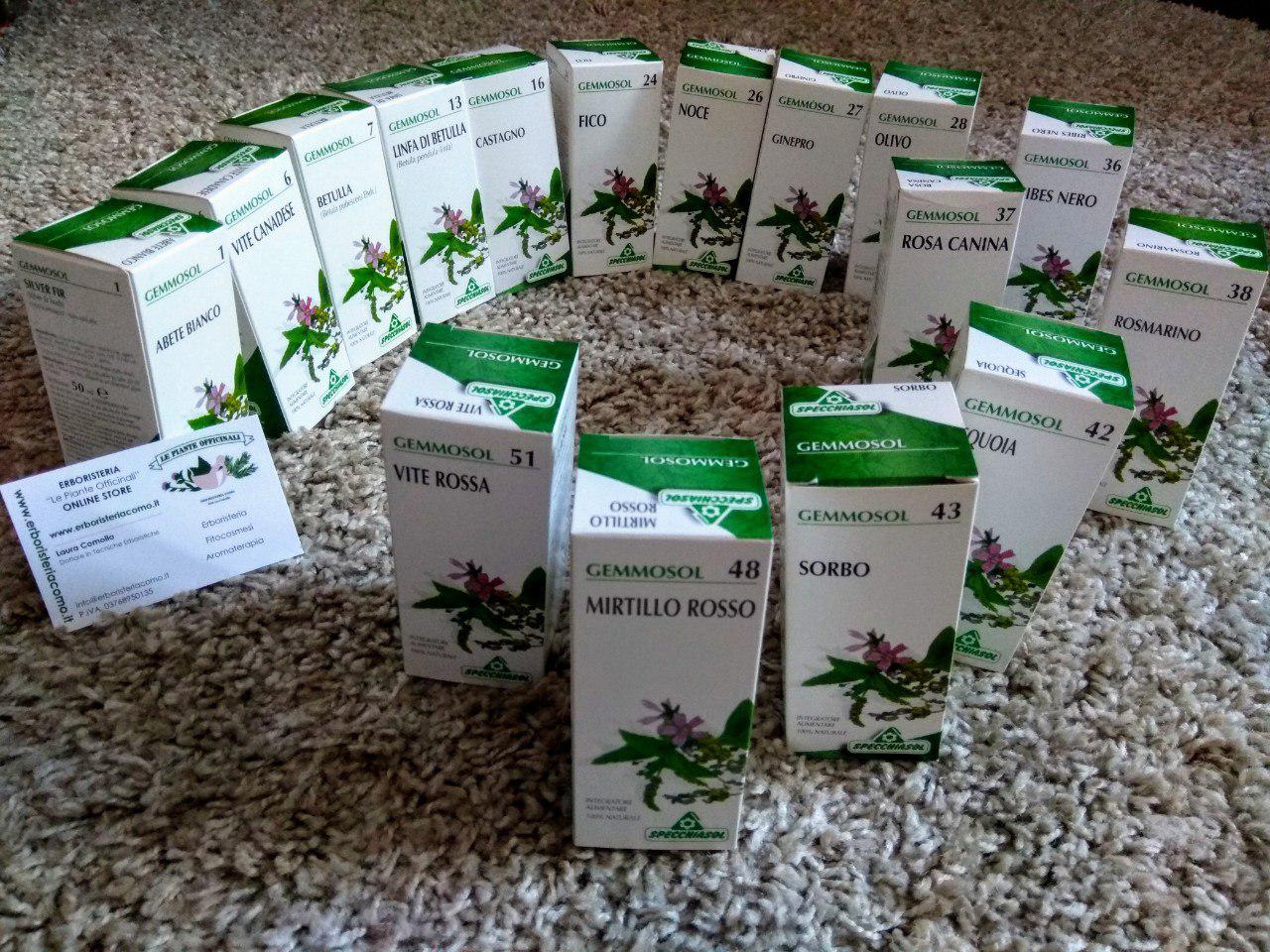