How to Control High Pression with natural remedies

This post aims to outline how can phytotherapy in maintaining good circulation conditions.

With the term "blood circulation" we simply indicate the motion of blood within the heart and blood vessels. Our vascular system consists of a system of vessels (arteries, capillaries, veins) that carry blood from the heart to the periphery and vice versa, continuously and at a certain pressure and speed. The passage of blood into the vessels is determined:

1) from the energy developed by the heart, which allows blood to flow into the vessel bed;

2) from the resistance to sliding opposite the vessel walls;

3) from the viscosity of the blood, which hinders the passage and causes an increase in upstream pressure. The caliber of the vessels is variable and this varies the flow rate, the speed and the blood pressure.

Who can be described as hypertensive?

The term hypertensive defines a subject between the ages of 30 and 60 who has blood pressure values, found on 3 different days, higher than 140 mmHg for systolic and 80 mmHg for diastolic. Systolic hypertension is the consequence of reduced aortic distensibility or an increased systolic contraction while the diastolic is the consequence of an increase in peripheral resistance. It is to this latter that today more attention is paid because it increases frequently even in apparently healthy patients and does not easily normalize with a treatment.

Treatment against hypertension is generally considered satisfactory when blood pressure does not exceed 140/90 mmHg and does not cause orthostatic hypotension disorders and is symptomatic because it limits the minimum and maximum pressure values: this reduces the functional disorders (buzzing, dizziness, headaches, visual disturbances ...) and delays or cancels (prevention) the appearance of complications that underlie the severity of hypertension.

In which cases can the plants help us to blood circulation?

The main cardiovascular diseases for which plant drugs could help us are:

- some specific diseases of the venous system such as chronic venous insufficiency (which we will discuss in the next posts) and hemorrhoidal disease (see post ..).

Which plants are recommended for help with cardiovascular disease?

Here are the plants recommended by the Escop (The European Scientific Cooperative on Phytotherapy) according to the need and reported in the Compendium to the Escop monographs (A. Lugli, 2007):

What are the plants chosen by us for the well-being of cardiovascular function?

In our Garlic Composed capsules, recommended for the well-being of cardiovascular function, the beneficial action is due to the synergistic association of Hawthorn, Garlic, Ginkgo biloba, present in capsule in the form of standardized dry extract. Let's see why. 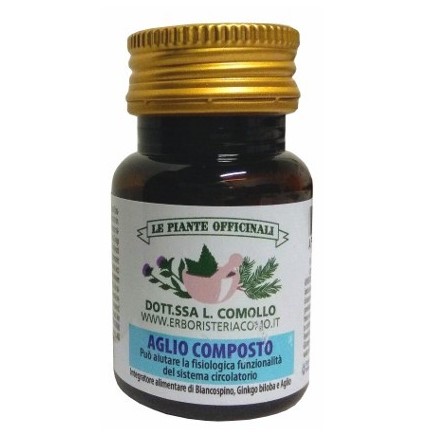 Garlic (Allium sativi) is the most studied herbal drug in the hypertensive field: it is an effective vascular spasmolytic and according to the WHO it "can be useful in the treatment of mild type hypertension". According to the Escop, garlic (powder) has as a therapeutic indication the prophylaxis of atherosclerosis and the treatment of hyperlipidemia. In fact: it inhibits various liver enzymes involved in the biosynthesis of cholesterol and lipids and in particular to inhibit the enzyme 3hydroxymethylglutarilCoA, a key enzyme for the synthesis of cholesterol; increases the activity of lipase in adipose tissues and therefore increases the degradation of triglycerides; increases the excretion of cholesterol; reduces LDL levels while increasing those of HDL and inhibits LDL oxidation, an important effect in light of the potential of garlic in the prevention of atherosclerosis.

The antihypertensive effect of garlic seems to be the result of its vasodilating effects; in fact, garlic causes an endothelium-dependent vasal dilatation, with a predominant role of nitrogen oxide (however allicin causes vasodilatation with a mechanism independent of nitric oxide synthesis).

But it is important to keep in mind that garlic does not mean only "allicina", but an incredible mix of active ingredients that justify, on the one hand, the reasons for the intuitive and popular millennial use of this vegetable, but also the constant research that are always specifying better the role of this plant in the blood circulation.

For example, the allyl disulfide inhibits, in the same way salicylic acid, the synthesis of thromboxane A2 and, therefore, acts as a platelet antiplatelet. It can also be observed that all the active compounds of garlic are characterized by the presence of sulfur and this fact gives these substances an anti-free radical action. The most significant damage caused by the action of free radicals consists in the phenomenon of "lipid peroxidation" at the level of membranes and cell walls; among the consequences there is also the platelet hyperaggregability, with the consequent vasoconstriction.

In addition, garlic is:

- hypotensive and vascular protector because it acts causing vasodilation of arterioles and capillaries. The effect is even more pronounced as the initial pressure values ​​are higher.

- antiseptic, balsamic, expectorant at the level of the whole respiratory system; these actions are attributed to the presence of organic sulfur whose garlic is particularly rich;

- antibiotic for bacteriostatic and bactericidal action: it acts on Gram + and Gram-;

- anti nicotinic: garlic has proven to be effective both in countering chronic disorders caused by the smoker by the abuse of nicotine and in reducing the nervous manifestations at the level of the heart, the catarrhal episodes and the irregularity of functioning of the intestine;

- anti cancer: recent work by US researchers have shown the presence in garlic, as in the onion, of substances that prevent the onset of tumors in the intestine and breast both for a specific action and by means of mechanisms of stimulation of the defenses endogenous immune systems. 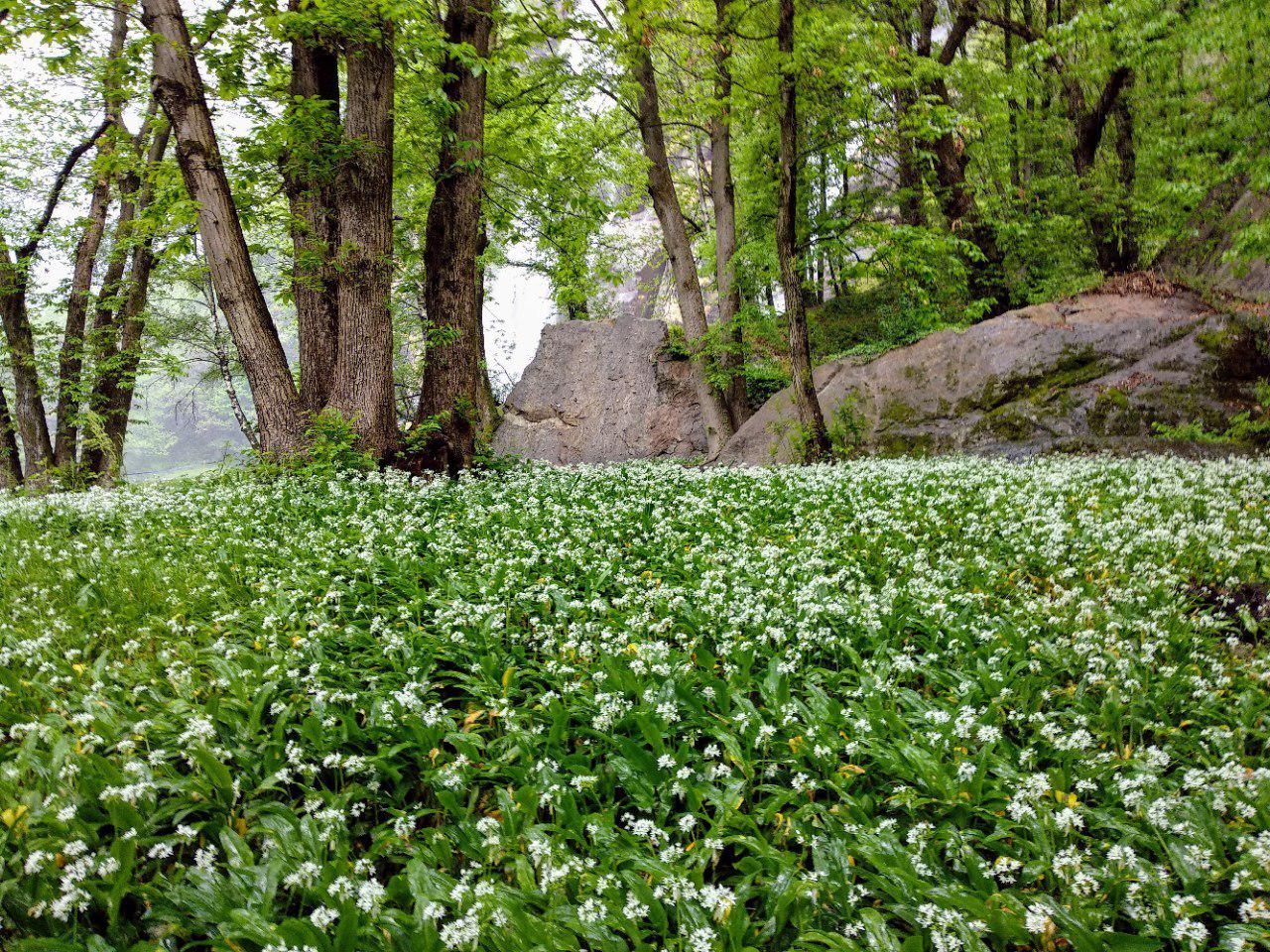 This photo was shooting by us in the town of Piuro, in Val Bregaglia (north of our Lake Como) and represents an expanse of Allium ursinum, wild garlic but also edible, but not to be confused with the autumnal Colchico, toxic.

Hawthorn: the drug consists of leaves and flowering tops of Crataegus laevigata. According to Capasso (2006), the well proven and typical properties of the hawthorn are the positive inotropic and the antiarrhythmic properties; furthermore, it should be noted that hawthorn has antioxidant activity (this action is particularly relevant in light of the fact that reactive oxygen species are involved in the pathogenesis of atherosclerosis, angina and cerebral ischemia.

In summary it can be said that the hawthorn acts on the cardiovascular system in two ways: 1) dilates the musculature of the vessels (in particular coronary) and therefore reduces the peripheral resistance and lowers the arterial pressure (therefore it limits the attacks of angina); 2) acts directly on the myocardium causing a positive inotropic action. Hawthorn also protects the vascular endothelium and reduces plasma cholesterol and triglycerides. In addition to being cardiotonic, it also acts against any forms of anxiety.

Ginkgo Biloba (leaves): the German E Commission recommends ginkgo for a series of disorders related to changes in the central and peripheral arterial flow; among these, it is mentioned that ginkgo increases the distance traveled (without experiencing pain) from patients with occlusive disorders of the peripheral arteries (claudication intermittens), with the warning not to neglect other measures, such as physical exercise, in particular walking. Capasso (2006).

The dry titrated extract of Ginkgo leaves regulates vascular tone by increasing vasodilatation and, therefore, the flow of peripheral blood in capillaries and arteries in various circulatory disorders, in Reynaud's disease, in varicosities, in post-thrombotic syndromes, in chronic cerebral vascular insufficiency. Chiereghin (2005).

Escop reports, in the Interaction with Drugs - Plants shown in the Escop monographs, that Ginkgo folium may have interaction with substances that inhibit coagulation.

Are there any other antihypertensive plants useful for cardiovascular function?

Other antihypertensive plants, NOT present however on the Escop Manual, nor among the monographs of the WHO, antihypertensive, popularly known are Olivo and Mistletoe. As for the olive leaves, Campanini, in "Complementary Therapies in Geriatrics" (2011) states that the olive leaves can be used in the forms of low-grade arterial hypertension. As for the mistletoe, its antihypertensive action is carried out by stimulation of the parasympathetic and decreased peripheral vascular resistance: this action is general and widespread, so that the mistletoe preparations would appear to be active not only in reducing arterial hypertension, but also headaches , dizziness, pericardial pain, vascular disorders of menopause, geriatric disorders. Mistletoe seems to have proven effectiveness in these situations: hypertension between the systolic 160 mmHg and the diastolic 95-100 mmHg. (Chiereghin, 2005).

Visit our herbal department or contact us for any clarification or for more information. The information reported is not intended as a source of medical advice to be used for self-prescription.