Cholesterol is certainly not a harmful substance, because it is synthesized in the liver to perform key functions, as it is a precursor of bile acids and is important in the synthesis of steroid hormones. It can not be transported from the blood, consisting mainly of water, in free form, so it must be bound to water-soluble proteins that are lipoprotein complexes. These lipoproteins are classified according to size and lipid content:

- HDL (High Density Lipoprotein) are defined as high-density lipoproteins that are not harmful to the body: they receive the cholesterol that leaves the cells and preside over the exchange and esterification of cholesterol. They are present in high amounts and protect against the risk of atherosclerosis in individuals who perform regular physical activity, consuming 1-2 glasses of red wine a day, they are not obese and smokers. They are higher in women who, in fact, have a lower incidence of myocardial infarction than men;

- LDL (Low Density Lipoproteins): have dimensions of 20 nm against 7.5-10 nm of HDL lipoproteins and constitute the share of harmful cholesterol.

What happens in case of hypercholesterolemia?
Cholesterolemia indicates the level of cholesterol in the blood, which is expressed in mg / 100ml. In an adult subject in good health and not at risk, this value should never exceed 200mg / 100ml, in particular that of LDL cholesterol, which must be in the 160mg / 100ml in subjects not exposed to risk.
The problem triggered by the high amount of blood cholesterol has repercussions on the cardio-circulatory system, which is affected both by blood circulation and by cardiac function. LDL cholesterol tends to accumulate in the inner part of the vessel walls, creating first partial obstructions to the flow and causing hypertension, then arriving at complete occlusion, causing instead phenomena of stroke and heart attacks.

What are the natural remedies for hypercholesterolemia?
In nature there are substances able to restore blood cholesterol levels to normal without using pharmacological molecules.
First of all the berberine, obtained from the bark of the Berberis Aristata plant (also known by the common name of Crespino), which has a selective action on LDL cholesterol: it has an action on reducing blood sugar levels and cholesterol levels with a synergistic mechanism of action to that of the Monacolins present in Fermented Red Rice. This was highlighted in the study "The involvement of P-glycoprotein in berberine adsorption Pharmacol Toxicol91 (4) 193-197 24 Zhou S, Lim LY, Chowbay B (2004)".
However, berberine has a very rapid half-life (it is quickly disposed of by the body) and too mild a gastric absorption, so it is associated with curcumin: curcumin, as shown in the study "Effects of Turmeric extracts and curcuminoids on expression of P-glycoprotein and cytochrome P450 3 A4 in the intestinal cell culture model LS180 ", inhibits the P-glycoprotein responsible for the bad absorption of Berberine, thus promoting the bioavailability of Berberine and thus improving its absorption.
Berberine and turmeric alone, however, would perform an activity that is not completely sufficient to bring blood cholesterol back to normal: the synergistic action is necessary with the monacoline of fermented red rice and in particular with the K monacolins, which are most effective action in the control of cholesterol.
Fermented Red Rice (Monascus purpureus Went) belongs to the family Monascaceae (Ascomycotina) and is traditionally prepared by fermenting boiled rice with Monascus purpureus yeast which gives the rice grains the typical red color.
Its effectiveness is due to the synergy of the different active ingredients contained in it: mono- and polyunsaturated fatty acids, phytosterols, isoflavones, glucosides and saponins, proteins, amino acids, vitamins and minerals, triterpenoid compounds, including the monacolin K, the most significant and able to inhibit a fundamental enzyme for the synthesis of cholesterol. Because of this characteristic, the fermented red rice extract is also called "natural simyltatin"as it naturally inhibits the endogenous cholesterol synthesis. All these biochemical mechanisms therefore explain the proven and proven efficacy in hypercholesterolemia of berberine and turmeric associated with fermented red rice.

Where can you find red rice, berberine and curcumin in synergy? 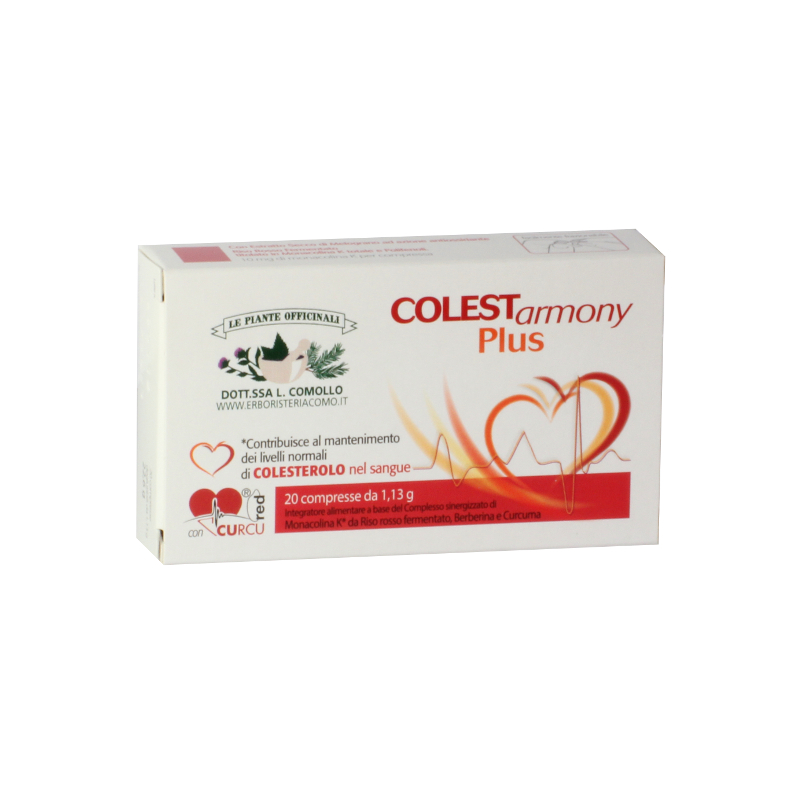 In Colestarmony Plus (20 or 60 tablets), we find the patented "Curcured®" complex, which contains turmeric, berberine and selected fermented red rice. Complete the formulation of pomegranate extract titrated and standardized into punicosides: an important study published in the journal Atherosclerosis has shown how the extract of Pomegranate reduces oxidative stress in the blood, promoting the reduction of risk of thickening of the arteries and therefore of atherosclerotic damage , the basis of cardiovascular diseases. It is also important to underline how important it is that pomegranate extract contains a certain quantity and standardized in Punicosides, which are mainly responsible for the antioxidant action and for the prevention of oxidation of "bad" LDL cholesterol.

In the Curcured® complex, fermented red rice contains 10 mg of total Monacolin K and is titled 2% of polyphenols with antioxidant action. Thanks to its HPLC-DAD chromatogram reported below, we can guarantee that this fermented red rice derives from a fermentation and drying process that respects the integrity of the plant complex: without these guarantees it is very likely that the Red Rice is the subject of sophistications supposedly due to additions of Lovastatina.

Here is another demonstration of the importance of synergism between the active ingredients of plants and the combination of research and technology.

Look at our products to combat cholesterol.