Mycosis to toenails (onychomycosis) and natural remedies Made in Como

Infections of the skin can be divided, depending on the eziology into bacterial, viral, fungal, parasitic. Among these, mycoses are included in the list of the most common skin diseases during spring and summer. Among mycoses there is a form that is often wrongly underestimated but which currently affects as many as 7 million Italians: the nail fungus, a pathology that can produce aesthetic, psychological and physical effects to say the least unpleasant.

The term mycosis indicates a group of pathologies due to the direct attack of fungi on humans. Fungal infections are among the most common causes of skin diseases. In medical mycology mycoses are generally divided into: cutaneous, subcutaneous and systemic, depending on whether the fungus invades the skin or internal tissues and organs. The skin types are the most common.

The pathogenic fungi that isolate most frequently from lesions of the skin or skin appendages (hair and nails) belong to the group of dermatophytes (keratinophilic and keratinolytic fungi) and the pathology for which they are responsible is indicated with the term dermatophytosis. The cutaneous mycoses caused by fungi not belonging to the dermatophyte group are called dermatomycoses. It is however to be specified that even yeasts can give cutaneous mycoses: for example the yeasts of the genus Candida and Malassezia (1). Dermatophytes include members of the genus Trichophyton, Microsporum and Epidermophyton. Among the most common infections are tinea pedis, onychomycosis and candidiasis (2).

Onychomycosis accounts for more than 50% of nail disorders, affecting approximately 6.5 million Italians between the ages of 40 and 60 and mainly affects toenails.

Onychomycosis is defined as any fungal nail infection, frequently caused by dermatophytes but can also be caused by mold and Candida. The infection is established due to the penetration of the fungi into the space between the nail plate and the nail bed (ie the part on which the nail rests).

Usually, hot and humidity present in the shoes favor the proliferation of mycosis. The fungus responsible for the infection penetrates through cracks and micro-fissures of the nail, breaks down the keratin layer that makes it up and transforms the pH from acid to alkaline. It follows a variation of shape, tonality and consistency of the nail.

There are different types of onychomycosis:

- the affected nail appears dull and thickened along the margin, without or with modest deformation; generally, yellow debris accumulates under the free margin (3). This condition, known as disto-lateral subungual onychomycosis, is almost always a dermatophytosis.

- when the fungal infection extends to the entire nail, this becomes fragile and the presence of subungual debris causes a painful deformation; this condition is called total dystrophic onychomycosis.

- rarely, when the infection originates in the matrix, below the nail, we speak of proximal subungual onychomycosis.

How to recognize onicomycosis: the symtoms

The symptoms of nail fungus, or onychomycosis in general, include:

- an increase in the fragility and friability of the affected nail;

- the deformation of the nail;

- the opaque sheet with different colors inside;

- an inflammation of the tissues close to the nail;

- the infected nails can also lift and detach from the nail bed (onychosis), cause pain, emit odor.

The dermatologist makes the diagnosis. Generally, onychomycosis turns out to be a problem of little importance, since it can be treated easily if recognized in a hurry. However, the presence of an onychomycosis can be the manifestation of an underlying pathology, for example a peripheral vascular disease, diabetes or immunodeficiency (3). In some patients, the nail surface appears white, powdery (superficial white onychomycosis).

How to prevent onychomycosis on the feet?

To prevent the development of nail fungus and reduce the risk of recurrent infections, good foot hygiene is essential:

- keep your feet as dry and clean as possible, avoiding very hot and humid places, especially if attended by more than one person (such as gym and pool changing rooms);

- wear socks that allow the feet to breathe and change them often, especially if the feet tend to sweat excessively: when possible, alternate closed shoes with open shoes;

- do not cut the "cuticles" around the nails (in order not to facilitate the access of the germs);

- do not walk barefoot in the changing rooms and showers of gyms and swimming pools, always wear slippers in the pool until you reach the pool;

- wash your hands well after touching an infected nail.

Innovative, simple and natural products have been formulated against mycosis to toenails by a company located in the mountains of the "Larian triangle", Microcosmo, which specializes in spagyria and in the aesthetic sector that bases its philosophy in total respect of nature. This company has been able to develop an antifungal treatment composed of two different solutions to be applied in succession, which in synergy with each other guarantee us a very high antifungal action. 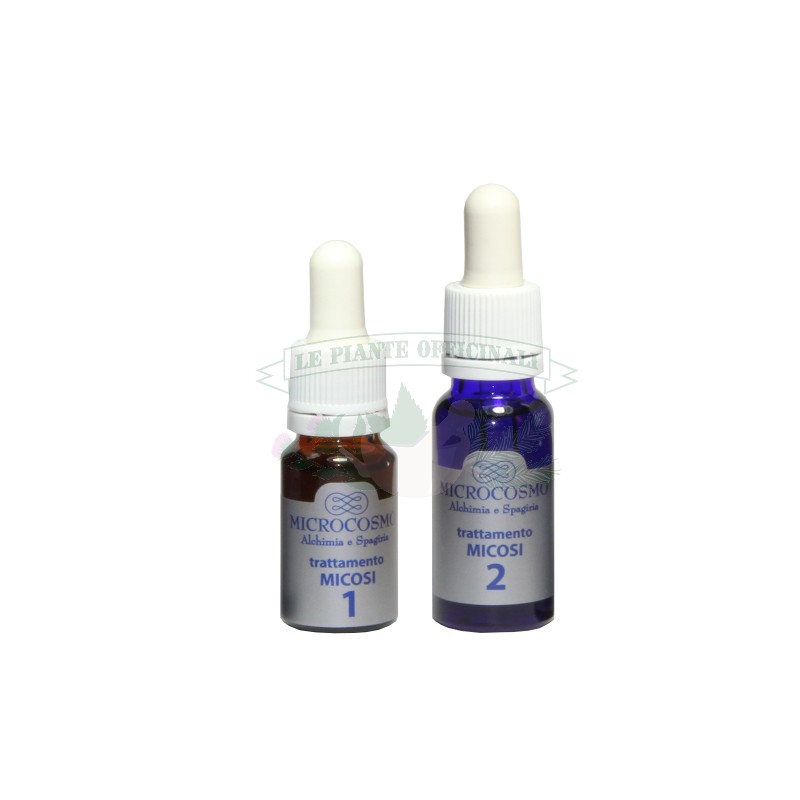 These two solutions have been studied by selecting the most effective natural substances on this type of skin problem:

- in treatment 1 the formulation involved colloidal silver (microscopic dispersion of elementary silver in distilled water), one of the most powerful antibiotics, natural antivirals and antifungals and horsetail extract;

- in treatment 2 the formulation provides, in addition to almond and coconut oil, some essential oils (such as tea tree oil, or essential oil of Melaleuca alternifolia, cinnamon and cloves), precious Microcosm scattering oleolites particularly nutrients and emollients with purifying, antifungal and antiseptic (helichrysum, thyme, sage).

Two words from Herbalist Technician on these formulations made in Como

The first treatment, based on colloidal silver and horsetail. Colloidal silver kills the fungi present in the nail keratin and also the pathogenic bacteria that commonly accompany each nail fungus in the mycotic manifestation and obliterates the fungi nestled in the nail; horsetail extract is rich in antioxidant substances, silica and molecules with astringent properties and externally it is generally used to restore tone and elasticity to the skin of the face and body, to purify skin and greasy hair, but also to strengthen hair and nails.

The second treatment, based on oils and extracts:

- Vegetable oils: almond oil is already a panacea for dry skin and hair, as it is nourishing and moisturizing, giving it new light, elasticity and vitality, but also in the case of nails, since they are made of keratin, it can be a valid help for fragile nails, as it strengthens the nails; coconut oil contains saturated fats that moisturize nails and slow down infections; castor oil, restructuring and nourishing; sunflower oil contains a high percentage (up to 75%) of linoleic acid and vitamin E and has a restructuring action on the tissues, stimulating the renewal of the epidermis and the regrowth of nails and hair ( 4);

- Essential oils: Tea tree (Melaleuca alternifolia) is the "guide plant" in onychomycosis, or "nail fungus", but also in all generic fungal diseases. The essence of Melaleuca, is an ideal disinfectant for the skin, both because it acts against different microorganisms, and for the good dermal penetration and the absence of irritations even with prolonged use for months. Randomized studies related to the efficacy of melaleuca oil can generally state that: topical treatment with melaleuca oil has given encouraging results due to a series of dermatological disorders, such as mild and moderate acne, tinea pedis, onychomycosis, infections with Staphylococcus aureus resistant to methicillin and to dandruff treatment (shampoo containing 5% oil, daily treatment for 4 weeks); the essential oils of cinnamon bark and cloves (Syzygium aromaticum or Eugenia caryophyllata), with an antimicrobial and antifungal action (4);

- Spagyric oils of: helichrysum in cosmetics boasts remarkable astringent, refreshing, anti-reddening and soothing properties on skin and mucous membranes; thyme represents a real natural antibiotic: clinical studies have shown that several pathogenic species are sensitive to this plant; sage extract contains terpenes with marked anti-inflammatory properties being able to inhibit the production of some inflammation mediators; the disinfectant properties of sage are due to the tujone in particular.

How to apply Microcosmo antifungal treatment

Visit our phytocosmetics department or contact us for any clarifications or for more information.

ALL RIGHTS RESERVED, THIS TEXT CANNOT BE REPRODUCED WITHOUT EXPRESS AUTHORIZATION OF ERBORISTERIA COMO