Arnica the powerful natural anti-inflammatory for external use

From May to August it is abundant in the meadows of hills and mountains, between 1000 and 2500 meters, on siliceous soil poor in limestone, the Mountain Arnica. Its flowers are bright yellow in the peripheral crown, while those that form the central disc have a more intense shade, sometimes in the range of orange. The leaves are oval-shaped, arranged in a rosette at ground level and two other, or four, very small can be seen along the stem that can be a palm or tall or exceed half a meter. This plant is present in the Alps in a single species, the Mountain Arnica, of the Composite family; in French it is called arnica des montagnes, in English Mountain Arnica and in German Arnika Wohlverleih. In popular tradition, on the other hand, it is known as the plant of the Alps, battonica, stranudèla, tabach de montagna or Vosges tobacco. The origin of his name is quite obscure: it seems to derive from the Greek parmarmic, a term translated as an arm meaning "which makes you sneeze".

The Mountain Arnica is not to be confused with its "American sisters" and continues to live, in aristocratic isolation, in our alpine valleys, ready to challenge the wind and the frost that beyond two thousand meters are certainly not to be overlooked. In fact, at the first signs of the bad season, the arnica montana seems to disappear from the meadows and pastures; but it is only his defense system because, in reality, under the blanket of snow, under the protective mantle of grass burned by the cold, the roots of Arnica montana rest and feed on preparing themselves for spring recovery. In fact, when the air becomes warm and pastures and meadows take up their dazzling green carpet, here are the slightly hairy leaves of the «stranudèla» (or «starnutella») peeping through the grass. Then, starting in May, the inflorescences appear on top of the thin stems of the arnica.

Mountain Arnica - wrote Dr. Giberto Scotti in the book "Flora Medica of the Province of Como" in the far 1872- was already traditionally known by the people, when in the beginning of 1600 was, especially by the German doctors, introduced in scientific practice. First were: Tabernamontano, Ioel, Fehr, Gohl, Traw, Werlhoft, Iunker, but principally Collin, prof. in Vienna, then Stoll; and so we come to the end of the eighteenth century; and the arnica enters the medical furnishings on which the new Italian school begins its experiences. The physiological phenomena of the arnica were diligently studied by Iörg over himself and 12 other people and are: a sense of irritation to the tongue and throat, often nausea, sense of fullness and oppression in the stomach, with cramps, tightening, burping, pneumatosis , rarely vomiting, relaxation of the alvo, lack of appetite. Frequency and irregularity of the mind and of the breath, increased heat, hypersecretion of the skin, of the kidneys, of the pulmonary mucosa, back pain, head weight, dizziness, moral abatement, uneasy sleep, prostration of forces occur. Returning to the present day, the German E Commission confirms that arnica and its preparations are poisonous if used internally: "they can cause headaches, abdominal pains, palpitations and breathing difficulties".

Arnica contains flavonoids (betuletol, eupafoline, isoquercitrin, luteolin-7-glucoside and astragalin), sesquiterpene lactones of the pseudoguaeanolid type, particularly ester derivatives of elenaline and 11,13-dihydroenelanin and an essential oil (up to 1 %, but generally 0.3%, the main components are thymol and its derivatives). The European Pharmacopoeia IV reports that the drug (Arnicae flos) is given by the flower heads, whole or partially broken, dried, of Arnica montana. Contains not less than 0.4% m / m of total sesquiterpene lactones, expressed as tiled filly, calculated on the dried drug.

Arnica is made from the flowers of Mountain Arnica L., fam. Asteraceae, and for external use it is the great remedy for all traumas, as long as they occur without wounds or spills that damage the integrity of the skin surface and there are obviously no bleeding vessels or capillaries. The active ingredients of arnica have a haemolytic action which prevents, especially if applied early, the formation of hematomas and in any case considerably increase the speed of resorption.

The German Commission recommends arnica-based preparations for external use in the treatment of post-operative and post-traumatic conditions such as bruises, strains, bruises, bruises, fracture-related edemas and rheumatic disorders affecting the muscles and joints. Other indications are oropharyngeal inflammations, furunculosis, insect bites and superficial phlebitis. The Commission also recommends its application only on undamaged skin and not near the eyes and on open wounds.

Preparations for external use: the Mountain arnica macerated oil

The Mountain Arnica macerated oil (or Mountain Arnica oil) is an excellent vegetable oil cosmetically used for skin care, with astringent properties useful for impure and irritated skin. It helps to soothe the epidermis in case of injuries from falls and in presence of small edemas or hematomas. It also helps to reinforce your scalp. Arnica oil restores balance for dry, thin, fine, rough and chapped skin.

The Mountain Arnica macerated oil how to use: put a small amount of product on the palm of your hands and gently massage It onto your face and body until It is completely absorbed, morning and night.

We have already explained in the previous articles what oleolites are and how they are prepared. Recall that for the choice of vegetable oils, essential in an oleolite as solvents for numerous apolar and low-polar active principles contained in plant tissues, parameters must be considered: • saponification index (it indicates the average length of fatty acids and the less long it is the largest chain will be the ability to solvate the polar molecules); • Iodine index: its high value indicates a high number of unsaturated bonds (therefore a high polarity and a great capacity to solvate polar molecules), a high fluidity but also its tendency to oxidize; •% unsaponifiable: it varies from oil to oils and becomes important for some (wheat germ, rice, sunflower, sesame).

The Mountain Arnica flowers were weighed and bruised and placed in a macerator with the amount of vegetable oils chosen for extraction; it is left to macerate for 15 days, shaking at least 3 times a day; once the maceration is over it drips and the vegetable still soaked in solvent squeezes or squeezes; finally it is filtered and in case of loss of volume it is topped up to the correct final weight. An antioxidant is also added to prevent the development of microorganisms. 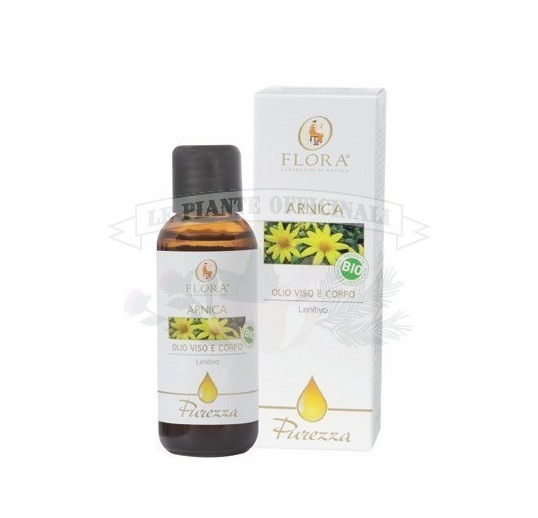 The Mountain Arnica macerated oil, made in Italy, selected by Erboristeria Como in the aromatherapy department is by Flora srl: it is certified cosmos organic (bio) and vegan ok, it does not contain: preservatives, dyes, allergens, PEG, synthetic substances, derivatives oil and has not been subjected to chemical refining processes. Here's what it contains:

- 100% pure cold pressed vegetable oils without the use of solvents and from organic farming: olive oil (common ingredient for liniments for muscular pain, heavy, rich in monounsaturated fatty acids), sesame oil (dense, useful for all skin types, psoriasis, eczema, rheumatism, arthritis), sunflower oil (used as a base for heavier oils as they are easily absorbed, rich in unsaturated fatty acids);

Preparations for external use: mountain arnica gel, a lot but so different

Arnica gel is of common fame and the trade abounds with these products. We at Erboristeria Como offer to our customers PHYTO ARNICA® gel. PHYTO ARNICA® gel is a glycolic extract obtained from flowers exclusively of the Arnica Montana species with 1: 1 Drug-Extract ratio.  PHYTO ARNICA® gel is produced in Italy among the Florentine Chianti hills, in compliance with the principles of quality and safety. 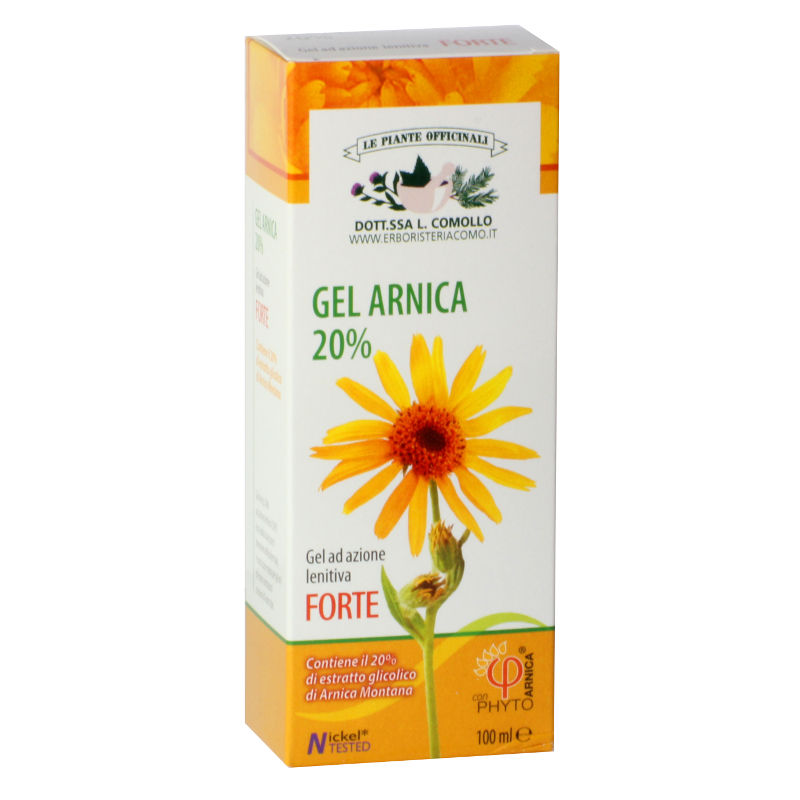 The anti-inflammatory activity of the PHYTO ARNICA® gel was first of all tested in vitro against Mexican Arnica. In fact, the Mexican Arnica is also called "false arnica" and its correct botanical name is Heterotheca Inuloides. I believe it is important to specify here that there are numerous products based solely on Mexican Arnica, or mixtures of Arnica Montana with Mexican Arnica. This is how the test happened: a mixed population of monocytes (white blood cells and lymphocytes) were isolated from human blood from healthy volunteers; it was used on bacterial LPS culture to trigger the inflammatory process and Mexican Arnica 1% to a group, nothing to the control group, arnica montana 1% to another group. The levels of Interleukin 8 and 6, which are the main mediators of inflammation, were also measured. Result: Arnica montana (PhytoArnica) has proved 10 times more effective than Mexican arnica.

Its effectiveness has also been tested against trauma and bruising.

Visit our aromatherapy department and phytocosmetic department (in functional cosmetic) for any clarification or for more information.