Ribes nigrum, or Blackcurrant, is a shrub without thorns characteristic of the Alpine area, up to two meters high, with leaves that have a long petiole and heart-shaped leaf lamina and divided into three to five lobes. The fruit is a black globose berry, with a greenish fleshy portion, which contains numerous small seeds. In herbal medicine, blackcurrant oil is obtained from blackcurrant seeds with anti-inflammatory properties. The blackcurrant bud extract is obtained from fresh blackcurrant buds.

The buds of Blackcurrant: the composition

Regarding the composition, in the Ribes nigrum buds the presence of phenolic derivatives (flavonoids and anthocyanins), in particular picnogenols, amino acids (arginine, proline, glycine, alanine ...), and a good concentration of vitamin C are reported. It is interesting to note that the gems, compared to the leaves and fruits commonly used in phytotherapy, are richer in vitamin C, anthocyanosides, flavonoids, picnogenols and amino acids. The richness in vitamin C justifies its use, for tonic and vitaminizing properties, in the prevention of infectious diseases, in immune deficiencies, in flu forms, in convalescence, in functional fatigue.

Therefore, the interest in the use of the bud extract appears evident, which is also called "the pearl of gemmotherapy" for its extended clinical value, only and as a synergy with other bud extract.

The blackcurrant bud extract has the following properties:

- a marked anti-inflammatory, anti-allergic and synergist action against other gemmotherapics which is often associated.

The anti-inflammatory activity attributed to the blackcurrant bud extract  is sustained: from its cortison-like action (Ribes nigrum, gems, MG1DH has the well-known "stimulating properties on the adrenal cortex, which make it a remedy with an action similar to corticoids, but lacking of dangerous secondary effects ”(Tétau)), and of flavonoids which oppose the release of pro-inflammatory substances which, thanks to the vitamin-Psimilar action, determine an improvement of the microcirculation and therefore of the local vascularization. Anthocyanins and flavonoids, according to some authors, act by inhibiting some degradation enzymes, such as collagenase, elastase, peroxidase, etc., and thus contribute to anti-inflammatory activity. Even the picnogenols contained in the buds strengthen this activity.

Flavonoids and anthocyanins, in addition to manifesting a vitamin P-similar action, have a regulatory effect on the permeability of biomembranes and a saving and strengthening action against ascorbic acid (vitamin C).

It is an established fact that vitamin C is able to enhance the chemotactic response of neutrophils by protecting the cell membrane from autoxidation phenomena, thereby enhancing the immune response. In fact, the white blood cells activated by vitamin C will help our body to better respond to infections. Furthermore, it seems that ascorbic acid plays an important role in the synthesis of neurotransmitters: in the event of stress, as well as being more easily exposed to infections, there is a lowering of the blood level of ascorbic acid which results in a state of fatigue mental, and it is only after a suitable administration of vitamin C that the "right tone" is recovered.

- adaptogens, which determine an immunoregulatory action and an increase in the body's resistance to stress in a broad sense. A plant is defined as adaptogenic "when it is able" to exercise "a non-specific action on physiological processes with the result of increasing the physical resistance against environmental stresses and the general efficiency in load situations, so as to better be able to adapt the 'organism at extraordinary loading conditions, and preventing the onset of diseases'. The adaptogenic action results, therefore, in a strengthening or prolongation of the physiological adaptation, and is an attempt by the organism to protect the energy reserves and to accelerate the biosynthesis of proteins and nucleic acids "(Selye H., Endocrinology , 21/2, p. 169, 1937).

Ribes nigrum bud extract: when to recommend it 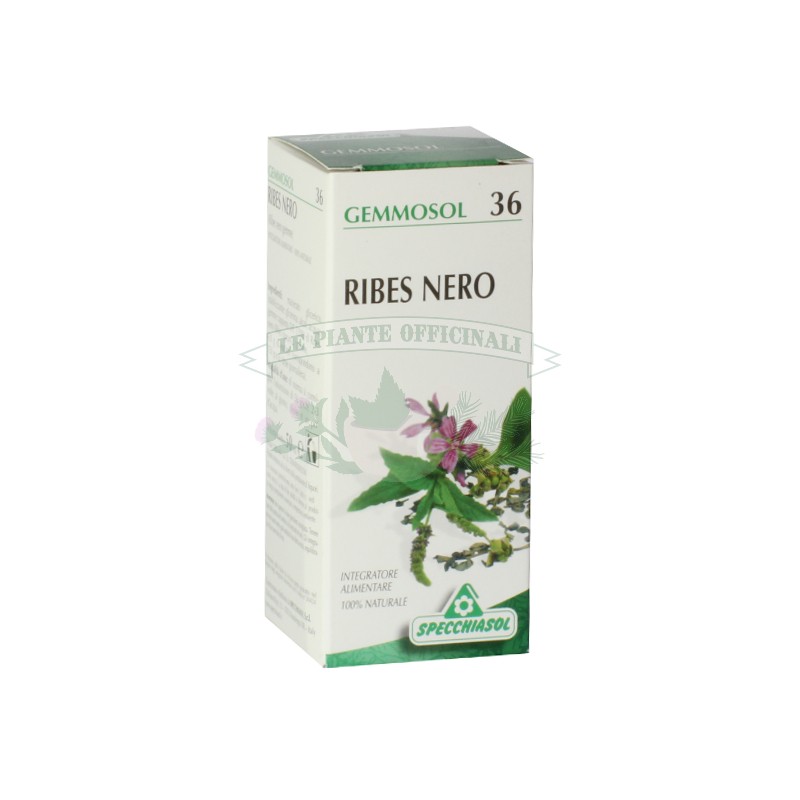 Without replacing the general practitioner, we will now discuss what the most specific scientific literature in the field (authors: Tetau, Brigo, Campanini) tells us about the blackcurrant bud extract.

As for the anti-inflammatory properties, these can be useful in a variety of pathological conditions, from acne to prostatitis, to sinusitis, etc. where the inflammatory component predominates. Effective in allergic syndromes in general, both for its antihistamine properties and for stimulating the adrenal cortex, it is indicated in various forms of allergy, from allergic oculorinitis to sunburn, drug allergy, migraine, etc. Therefore, it can be stated that the use of the blackcurrant gemmoderivative is indicated in clinical manifestations where it is necessary to stimulate the adrenal cortex, such as:

- in general and local inflammatory manifestations, in particular against the locomotor apparatus, but also in the respiratory, digestive and urinary tract.

At the level of the osteoskeletal apparatus, for example the blackcurrant bud extract  is an important remedy against osteoarthritis as it favors the decrease of the algic and inflammatory component, an improvement in the rigidity of tendons and ligaments, and therefore a better joint play. Equipped with anti-inflammatory activity, it acts by direct stimulation on the adrenal cortex (cortisone-like action): its administration increases, in fact, the concentration of blood cortisol. Extensive clinical use has also shown that it does not possess the iatrogenic effects of corticoids.

"Acting on the adrenal glands, the currant buds increase the general tone, the sexual tone, and ensure a general drainage from the body of all its toxins. Particularly at cartilage level, this action protects from arthrosis and at the same time ensures a repair of the injured cartiligens "(Tétau M., Scimeca D., op. Cit., P. 52).

The blackcurrant bud extract is indicated in Allergic rhinitis: it, also often called "hay fever" is characterized by an inflammation of the nasal mucosa triggered by exposure to a substance (allergen) to which the immune system of allergic people reacts in improper way. Tétau states: "The budding bud of Ribes nigrum, MG1DH, at a dose of 50 drops in the morning on an empty stomach" is the great herbal remedy for allergy because it has a cortisone-like effect and has no toxicity. This adrenocortical stimulation is useful in presence of the allergic syndrome, since in the majority of cases the patients are long-limbed asthenic, with imbalance of the thyroid-adrenal glandular couple, in the sense of an adrenocortical deficiency and a functional thyroid increase ". For this specific problem, the blackcurrant gemmoderivato found in Erboristeria Como in the medical device Fitoallergy drops: in this device there is 10 times concentrated glycerine macerated currant, in practice it is obtained by maceration of fresh Ribes nigrum buds in alcohol and glycerine but is not then diluted to obtain the MG 1DH, resulting therefore 10 times more concentrated thus allowing to reduce the number of drops from to spell out and with greater effect. This device is for preventive purposes and should be used in winter, for 60 days without interruption, to prepare in time to face the spring season. 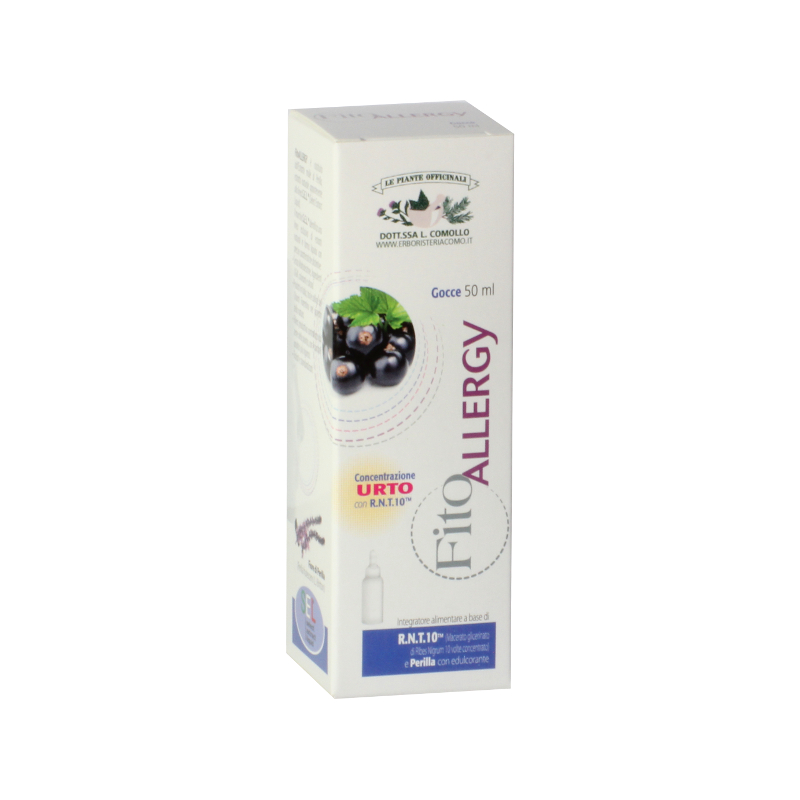 Other reports related to the therapeutic use of the blackcurrant bud extract concern:

- the use in the treatment of mononucleosis, in the sequelae of an antibiotic therapy, and as a chemo-protector: in the latter case it can be "usefully" associated with the gemmoderivato of Sequoia gigantea (Andrianne P., op. cit.), to dose of 50-100 drops per day, or in single administration, in the morning on waking, 15 minutes before breakfast, in a little water. The speed of cortisol secretion begins in the early hours of the morning, before the individual wakes up and gradually decreases in the late evening: the single administration in the morning seems therefore to be the most effective one.

- its action at the level of the cardiovascular system, in addition to its phlebotonic properties (anthocyanins and flavonoids), contributes to raising arterial pressure in hypothesis subjects (action stimulating adrenal cortex). Generally it is not recommended for precautionary use, in hypertensive subjects, cases in which, moreover, it would support diuretic properties and therefore mildly hypotensive.

- its use in the treatment of herpes simplex, where as a general treatment Echinacea, T.M. at a dose of 30 drops at least 2 times a day, on an empty stomach; of the blackcurrant bud extract MG1DH for its anti-inflammatory value and of the linden bud extract (Tilia tomentosa MG1DH) because often the psychosomatic component is not to be underestimated.

A topical use is also reported in insect bites: a few drops of macerate on the puncture.

The impromptu associations are valid, that is to say to mix in the same glass more derivatives, or to complement complementary gemmoders during the day.

How do you take the Ribes nigrum bud extract?

We recommend taking 50 drops, diluted in water and sipping slowly, 1-3 times a day.