Home > Blog list > Magnesium supplements: what they are for and which one to choose

Magnesium supplements: what they are for and which one to choose

Magnesium is a typical intracellular ion that takes part in many metabolic reactions. The human body contains about 25 grams of magnesium, of which 99% at the intracellular level and the remainder in the extracellular fluids in the form of a free ion or complexed with membrane phospholipids that with nucleotides or bound to albumin, ATP, phosphocreatine and myosin. 90% is contained in bones (60-65%) and muscles (25-30%), while only 5-7% in other cells.

Magnesium is absorbed mainly in the intestine (especially in the jejunum and in the ileum) and through a specific transporter for low concentration levels and passive diffusion in the presence of higher concentrations. A non-negligible proportion seems to be absorbed even at the level of the colon. Magnesium is then released in the plasma for about 55% in free form and 13% in a complex form with citrate, phosphate ..; the remaining part is mainly bound to albumin. After absorption in the gastro-intestinal tract, the magnesium, in "pool", can follow different fates: reaching the various districts of the body to carry out the numerous functions in which it is involved, being deposited in the bone tissue, being eliminated with urine. Magnesium homeostasis is assured:

- the integrity and efficiency of the absorption process;

PTH (parathormone) responds to changes in palsmatic concentrations of magnesium with the same mechanism by which it regulates calcium homeostasis: in the case of a reduction in plasma magnesium concentration, for example, an increase in plasma PTH concentration occurs which determines mineral resorption at the renal level than its release at bone level.

Most absorbed magnesium that is not retained by the body is mostly eliminated in the urine. The kidneys have the ability to ultrafiltrate 75% of plasma magnesium; of this, in conditions of good renal function, about 95% is reabsorbed. The kidney tends to conserve magnesium in the most efficient way the lower its concentration in the plasma. Magnesium eliminated with faeces is mainly composed of unabsorbed food magnesium (equal to about 70-80% of that introduced) and to a small extent from that secreted with bile and pancreatic and intestinal juices.

The properties of magnesium and benefits

Magnesium is indispensable for life as an essential constituent of all living cells. Its remarkable biological importance derives from the fact that it enters the structure of the chlorophyll molecule, indispensable for life on earth, because thanks to it and to solar energy, plants synthesize sugars starting from water and carbon dioxide. Furthermore, it is also part of compounds containing bonds that cells use as an energy source, such as the Mg-ATP complex.

Even within our body, magnesium participates in chemical processes that play a vital role. Magnesium, although in infinitesimal doses, is present in about 99% of the cells, in which it plays a decisive role: it regulates the permeability of the cell membrane to minerals. This regulation is very important because it also allows the transmission of nerve messages and the contraction of muscles. Magnesium is therefore decisive in the regulation of neuromuscular excitability.

Magnesium is also indispensable for metabolism, as it is a necessary element for the correct functioning of over 300 enzymes (which favor and accelerate important biochemical reactions in the body). It allows metabolic reactions and allows the production of energy in the form of ATP starting from sugars and fats, it is essential for the use of energy at the level of nerve and muscle cells, and it is also an effective alkalizing agent (it counteracts acidity) .

Another fundamental role played by magnesium is to allow the production of antibodies and to allow the body's self-defense mechanisms, through the action of white blood cells, which absorb pests and pathogenic microorganisms. Magnesium also hinders the penetration of toxic substances into the cells.

Magnesium also performs other fundamental tasks for our health:

- takes part in assimilation and fixation of calcium in the bones, helping to strengthen the skeletal system;

- it is useful for people who carry out intense physical or sporting activities because, in addition to providing energy, it helps fight fatigue, cramps, lactic acid;

- has a purifying effect on the skin.

Magnesium in the diet:

How to ensure the necessary magnesium dose to the body? The simplest method is to follow a diet with plenty of products containing magnesium. Magnesium is widely distributed in foods of both animal and vegetable origin. The main sources are legumes (including soy, beans, lentils), dried fruit (almonds, walnuts ...), cereals (especially whole-grain ones). Fair amounts of magnesium are also present in cheese, meat and fish. Mineral waters can also bring considerable quantities.

Usually in the Italian diet it is estimated that the average magnesium content is estimated at around 246-262 mg / day, obtainable from:

- vegetables especially those with green leaves such as spinach (magnesium is present in good quantities in chlorophyll) but also in beets and vegetables; (30%)

- dried fruit (good quantity of magnesium is contained in cashews, as well as in dates, apricots and dried figs and in powdered cocoa powder) and fresh fruit (bananas, oranges, prunes, apples and pears); (15%)

But often our health does not depend only on the quantity of foods with a high magnesium content but also and above all on quality.

The Ministry of Health, in the table concerning the "daily intake of vitamins and minerals allowed in food supplements, revision April 2019" establishes a maximum daily intake of 450 mg of magnesium.

- to relieve anxiety and promote concentration;

- to protect the heart and circulation, for those who are hypertensive;

- to combat insomnia and depression;

- to facilitate the metabolism and purify the skin.

Conditions and symptoms of magnesium deficiency

- a reduction in PTH secretion and a decreased sensitivity of osteoclasts to changes in blood calcium;

- a high reabsorption of citrate in the renal tubules, which leads to an increased risk of developing kidney stones;

- alteration of lipid metabolism, with increased blood levels of phospholipids and triglycerides, due to reduced activity of lipoprotein lipase and lecithin cholesterol acyltransferase;

- increased cyclooxygenase activity and therefore an increase in the level of prostanoids.

- moderate symptoms: variation of the electrocardiogram trace, slowing of the reflexes, mental disorders;

A fundamental factor in the usefulness of a magnesium supplement is that magnesium is in the form most easily absorbed by the body.

In general the organic forms of magnesium salts are more easily absorbed than inorganic ones, with the exception of magnesium chloride.

Magnesium chloride is generally the most widely used form on the market because it supplies the mineral in good quantity and in an easily assimilable form, because it is a highly soluble compound in water. Moreover, compared to other magnesium compounds, this compound appears to have a greater capacity to stimulate phagocytosis, ie the ability to phagocytize hostile viruses and bacteria.

Other forms of magnesium known on the market:

- magnesium sulfate, or "Epsom salt", used for its laxative properties.

- in homeopathy the magnesium-based element most commonly used is magnesium phosphate (also called "magnesia phosphorica", one of the "Schussler salts"), as it seems to play an important role on the central nervous system, on peripheral nerves and on the muscles, it also seems to harmonize the metabolism and has a balancing effect on muscle tone as it is able to dissolve cramps and blockages, often due to nervous disorders and states of exhaustion.

The best magnesium supplement is the most assimilable

The "supreme magnesium" supplement, which we can find on the market, is a powder mixture of the two elements (magnesium citrate and citric acid). "Active Magnesium", in our brand is also made up of two ingredients:

- citric acid from natural fermentation. Citric acid is contained in most animal and vegetable organisms, both free and as calcium and potassium salt. Large quantities are present in lemon juice, various types of fruit, beet juice, wine, tobacco, etc. Citric acid plays an important role in cellular metabolism being an intermediate product of the Krebs cycle, called for this citric acid cycle. It is formed in the tissues by condensation of oxalacetic acid with acetyl-CoA in the presence of the enzyme citrate-synthetase.

The reaction: Magnesium carbonate and citric acid once dissolved in water give rise to a chemical reaction that releases carbon dioxide (responsible for effervescence once water is dissolved), forming magnesium citrate. Magnesium citrate in contact with hydrochloric acid in the stomach forms magnesium chloride, which is the compound that is actually absorbable by the body.

Why not administer magnesium citrate or magnesium chloride directly? because they are not of natural origin but obtained through synthesis processes (purification through the use of aggressive solvents such as chloroform), with consequent low bioavailability.

The well-known and commercial "Supreme Magnesium" for single dose contains 215 mg of magnesium, unlike 240 mg of "active magnesium": 14% more for a single dose. 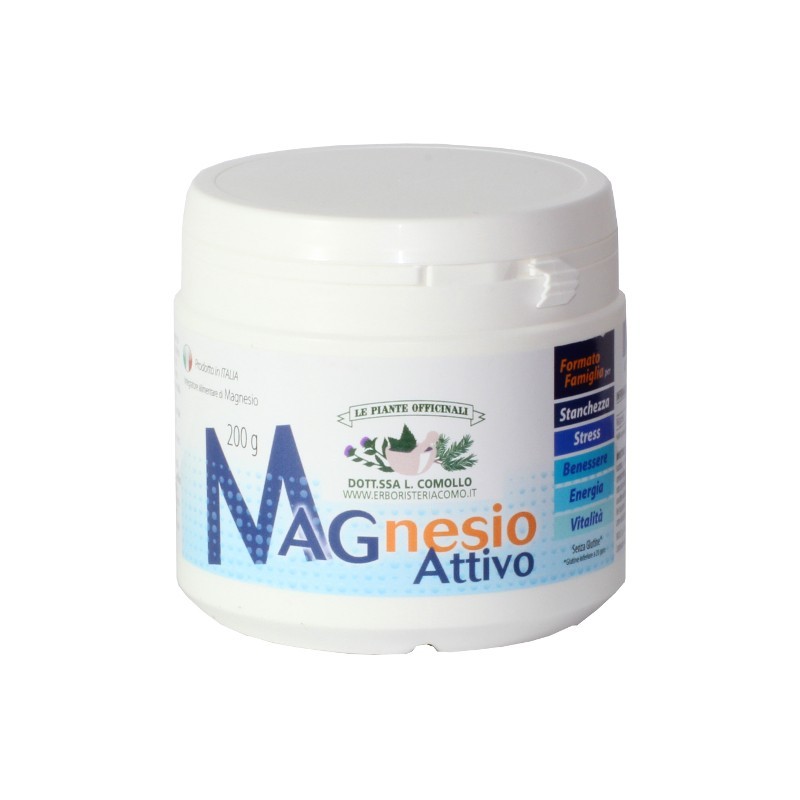 How and when to take active magnesium?

Active magnesium, gluten free: we recommend taking a full scoop (about 2.4 g), to be dissolved in water at room temperature. Do not exceed the recommended daily dose.