Jojoba oil? I will tell you a secret: it is not a real vegetable oil, but a liquid vegetable wax, Jojoba wax!

The vegetable waxes are contained in the most different parts of the plants and the greatest quantity of vegetable waxes is produced by tropical plants or located in arid areas (where they are used to reduce the evaporation of humidity). Vegetable waxes:

- they are soluble in many organic solvents (ether, toluene ...) but they are less soluble than real fats;

- they do not go rancid and are less easily hydrolysable than fats;

- due to the high molecular weight of their fatty acids, their saponification number is lower than that of fats. They are also characterized by a very high% unsaponifiable (sterols, higher saturated aliphatic alcohols, hydrocarbons, ..).

Jojoba oil: where it comes from

Jojoba wax is a liquid wax that is obtained from the seeds of Simmondsia californica*, a shrub that grows wild in the desert areas of California, Mexico and Arizona, an oil is extracted that differs markedly from the chemical point of view, from all the others vegetable oils.

A curiosity*: the name jojoba was originated from the "O'odham" population (correct name of the North American natives otherwise called Pima), who live in the Sonoran desert in the Southwest of the United States and Mexico, who treat sunburn with the ointment taken from oilseeds. Despite its scientific name (Simmondsia chinensis), jojoba has no relation to China. This incorrect name was due to a transcription error! the botanist Johann Link originally named the species as Buxus chinensis, after misinterpreting the words "Calif." as "China" in the collection of Thomas Nuttall. The renaming was attempted as Simmondsia californica, but according to the rules of priority in the nomination must be privileged the specific name assigned first, and therefore the term "chinensis" remained.

Jojoba oil: characteristics, use and curiosity

Jojoba wax (or "jojoba oil") is golden yellow and if "of quality" should be pressed cold and filtered without the use of solvents. It has a melting point at 8 ° C, and should solidify below that temperature; if it does not, it means that it has been refined or mixed with cheaper oils.

Unlike vegetable oils, rich in triglycerides, jojoba is a wax rich in esters: more precisely, it is composed of 93% unsaturated fluid esters and for this reason it is very stable and has an excellent duration. The major component of jojoba wax is erucil 11-cis eicosinato (which makes up 43%). It also contains myristic acid and a lot of vitamin E. In cosmetics it is exploited, Jojoba wax, both the double unsaturation of esters and the excellent lubricating, protective and softening power.

The first to use it were the Aztecs, to cure burns and wounds, to heal and smooth the skin, combating their roughness and dehydration, to protect themselves from solar radiation and to improve the aesthetics of the hair.

Excellent vegetable oil for cosmetic use, with high protective and emollient power on epidermal cells, jojoba oil is useful for all skin types, particularly for inflamed and sensitive skin, acne, and dermatitis. It nourishes dry skin and cleans the oily skin in a very balanced way. Excess sebum (greasy skin and hair) dissolves in jojoba. Myristic acid is anti-inflammatory and so could be a good base oil for rheumatism and arthritis. Promotes brightness and elasticity of the skin of the body and face. With light massages to the scalp it is an excellent adjuvant in reducing seborrhea, dandruff and baldness. In relation to the principles of ayurveda, jojoba oil is a rebalancing of the skin PITTA and KAPHA.

Being very similar to sebum, it penetrates the skin very quickly, so it is excellent for nourishing the skin. It has antibacterial properties. Contains myristate, antioxidant, and can help lengthen the average life of other oils. Use at 10%.

In modern phytocosmetics jojoba oil is used in moisturizing creams for the face and body, pre and post-sun products, massage preparations, protective ointments especially for skin folds of the newborn and for labial mucosa, as well as in balms after shampoo.

Jojoba oil: what recommend you 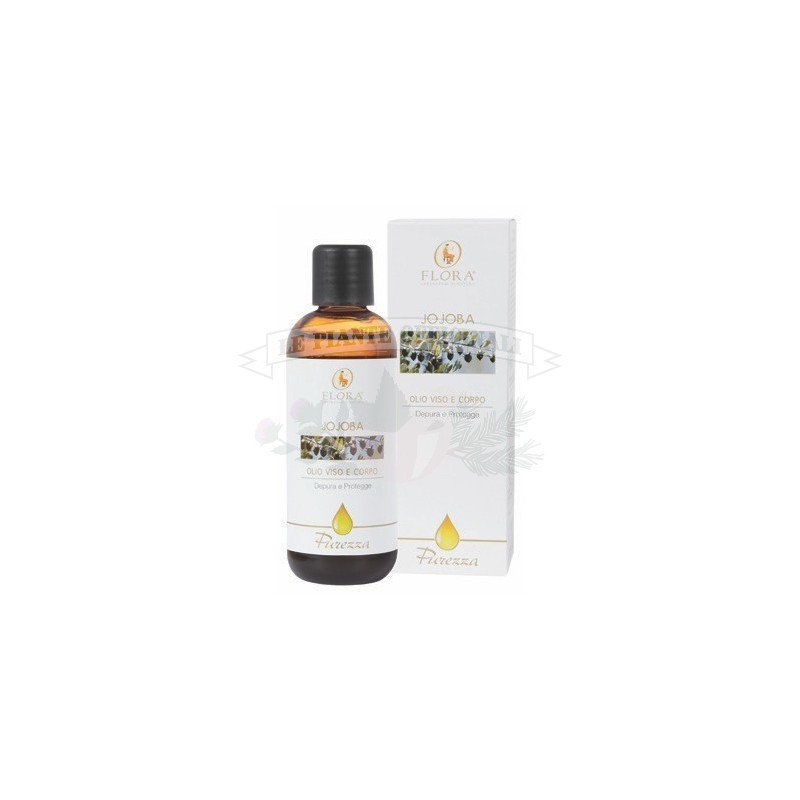 Here the best jojoba oil, which you can find on Erboristeria Como, is that of Flora bio srl. It is 100% pure vegetable oil of Simmondsia chinensis seed oil, produced from the seeds of the cold-pressed jojoba bush. Biological agriculture. Certified Cosmos Organic, Vegan ok, LAV.

It does not contain preservatives, dyes, PEGs, synthetic substances, petroleum derivatives and has not been subjected to chemical refining processes.

Jojoba oil: how to use

Put a small amount of jojoba oil on the palm of your hands and gently massage it onto your face and body until it is completely absorbed, morning and night.

Jojoba oil is widely used as a carrier oil in aromatherapy and as a massage oil. For lovers of do-it-yourself cosmetics, passionate about "spignatto", here is a simple recipe easy to make with jojoba oil:

Visit our aromatherapy department for any clarification or for more information.