How to prevent stomach ache and acidity with natural remedies

Burning Stomach is a very common symptom that may be the indicator of various "acid-related" conditions (gastritis, gastro-oesophageal reflux, dyspepsia, gastritis, ulcer).

The gastric juice is produced by the glands of the bottom mucosa and the body of the stomach and is presented as a transparent liquid formed by water (over 99%), mineral salts, mucus, hydrochloric acid (from which the pH strongly acidic, which is produced as a result of vagal stimuli for gustatory, olfactory, masticatory and psychic reflexes) and pepsin, the enzyme that starts the digestion of proteins transforming them into peptides. It also contains mucoproteins with protective action on the mucosa, non-digestible, and the so-called Castle factor that binds vitamin B12 and allows its absorption in the terminal ileum. The gastric juice has the function of facilitating the digestion of food and disinfecting the contents of the food introduced. It is secreted both on an empty stomach and during digestion. The secretion of gastric juice is regulated by nervous, humoral factors. Also the gastrointestinal hormones have effects, inhibitors or stimulators, on acid secretion.

The protective activity of mucus-secreting cells is controlled by cholinergic, mechanical and prostaglandin E stimuli (produced by parietal cells, main cells and by the same mucous cells of the stomach). Prostaglandins also act by increasing the blood flow of the mucosa (the maintenance of which is essential for the continuous production of mucus), maintaining the integrity of the intercellular junctions and stimulating the turnover of the epithelial cells in response to damage on the mucosa.

Among the factors that interfere with the production of mucus can be mentioned: aspirin and NSAIDs (anti-inflammatory drugs), which block the production of prostaglandins; Helicobacter Pylori, which produces substances capable of facilitating damage to the mucosa; the alcohol; corticosteroids; the smoke; unbalanced and hasty nutrition; the stress; the lysolecithin contained in the bile.

We are therefore in the presence of a delicate balance between aggressive factors such as acid and pepsin (acid secretion), necessary for the functioning of our body, and defensive factors of the mucous membranes (production of mucus, bicarbonate, blood flow).

Reflux, dyspepsia, gastritis are the signal that this delicate balance has changed:

the pH of gastric juice has shifted to values ​​<1.2-1.6. Peptic ulcer also seems to derive from this imbalance: the Gram negative Bacillus Helicobacter pylori, which is the main cause of peptic ulcer (with the exception of gastric ulcer induced by aspirin-like drugs), infects patients with active chronic gastritis , colonizes the deep layers of the gastric mucus and presumably hinders its protective properties.

What is the current treatment for treating stomach acid, gastritis and ulcer?

Currently the most common drugs used to cure stomach acid and antiulcers on the market are: antacids, H2 antagonists, proton pump inhibitors.

The antacid actually has only symptomatic effect, in the sense that it eliminates the effects produced by the increase in acidity without eliminating the cause that produces it; among the undesirable effects presented by antacids, the following should be highlighted: possibility of causing systemic alkalosis when their action is not localized to the gastrointestinal tract only; action on intestinal peristalsis with the possibility of causing constipation or diarrhea; formation of some antacids of carbon dioxide with consequent dilatation of the gastric wall and production of intestinal gas; the "acid return" due to a hyper-neutralization of the gastric acidity with consequent resumption of secretory activity by the gastric mucosa which can bring the pH into the stomach to values ​​even lower than the starting one.

H2 antagonists inhibit histamine-induced gastric acid secretion in a dose-dependent and competitive manner, inhibit gastric acid-mediated gastric secretion and, to a lesser extent, mediated acetylcholine secretion. In the presence of H2 antagonists, however, histamine fails to stimulate the proton pump because it releases hydrochloric acid into the stomach, but gastrin and acetylcholine are still active. Therefore, to completely block the secretion of gastric acid, regardless of the origin of the chemical stimulus, the pump itself must be inhibited.

What can natural remedies be?

Among the various medicinal plants advisable against stomach acid, the first choice is due to licorice, due to its characteristics of gastric buffer. Of the licorice (Glycyrrhiza glabra) the cicatrizing actions on the gastric lesions are well known. The actions are due to triterpenoid saponins consisting of glycyrrhizin, which is a mixture of ammonium salts and calcium of glycyrrhizic acid, which is responsible for the anti-inflammatory action. Glycyrrhizic acid is found in maximum concentration in the subcortical zone of the root. The yellow part of the licorice root contains flavonoids to which the spasmolytic action is due. The properties of the root licorice, according to the ESCOP, are the following: "adjuvant therapy of gastric and duodenal ulcers and gastritis; cough and bronchial catarrh as an expectorant ".

The scientific research of the Tuscan laboratories of "Biodue Spa. Officinal Plants" in collaboration with the University of Florence, has grasped the importance of addressing the acidity of the stomach by preventing acidity from returning and, at the same time, helping the organism to protect yourself, thanks to an extract called GutGard®. GutGard® is an exclusive patented extract of Liquirizia, and is unique because it titrated at least 3.5% in glabridin, max 0.5% in glycyrrhizinic acid (does not cause hypertension) and is titrated at least 10% in total flavonoids. Here are the results of the studies conducted on GutGard, which explain the action:

- reduction of abdominal pain, abdominal swelling and gastric reflux (symptoms of dyspepsia) if you take GutGard twice a day for a period of 30 days, thanks to the anti-inflammatory action of the glabridin component, which has shown anti-inflammatory activity through the modulated and non-non-selective inhibition of COX and Leukotrienes.

From the "GutGard® Alleviates the Symptoms of Functional Dyspepsia" Study

- inhibition of H. Pylori, main responsible for gastritis and ulcer, again thanks to the glabridin component. The mechanism of action demonstrated is the inhibition of DNA gyrase (enzyme necessary for the genomic stability of H. Pylori).

From clinical studies: "In VITRO anti-Helicobacter pylori activity of a flavonoid rich extract of Glycyrrhiza glabra and its probable mechanisms of action"; In Vivo: "Effect of GutGard® in the Management of Helicobacter pylori"

- reduction of GutGard ulcer comparable to Omeprazole, but without increasing pH levels. GutGard® reduces gastric acidity by inhibiting the proton pump and the enzyme carbonic anhydrase. The inhibition of the enzyme Anhydrase Carbonica avoids this reaction that leads to acid secretion: CO2 + H2O = HCO3 + H (acid).

GutGard® is present in two products that we propose: Break acid (for the acute phase of acidity, inflammation) and GastroRebuild (for the chronic phase). The first, Break acid, is used to deal with burning, reflux, hyperacidity; the second, GastroRebuild, to tackle the problems of a chronic nature (Gastritis, Helicobacter Pylori, Gastric ulcer, Abdominal pain).

Break acid and GastroRebuild against heartburn. 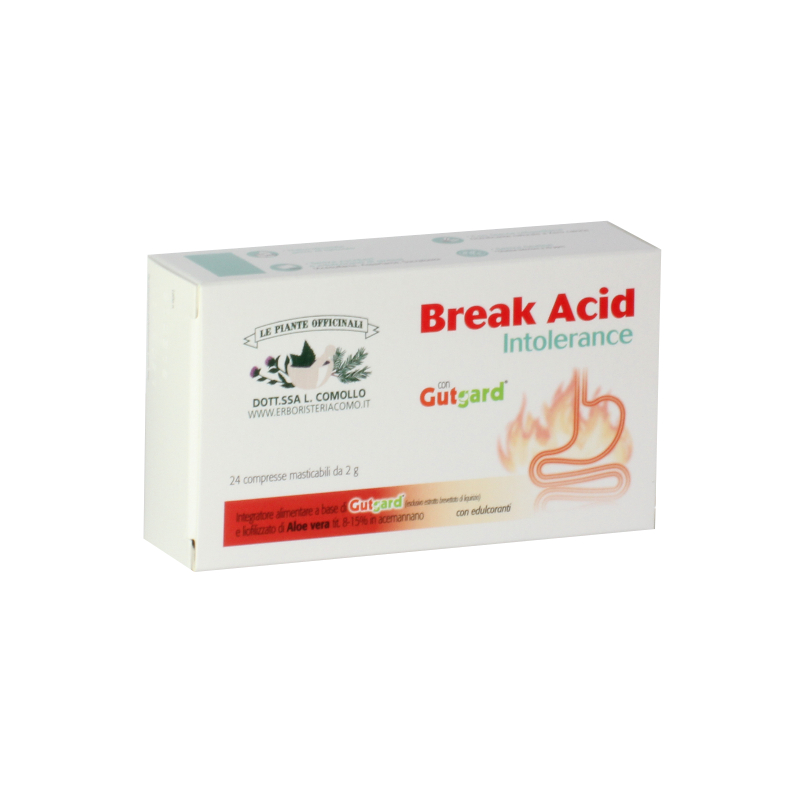 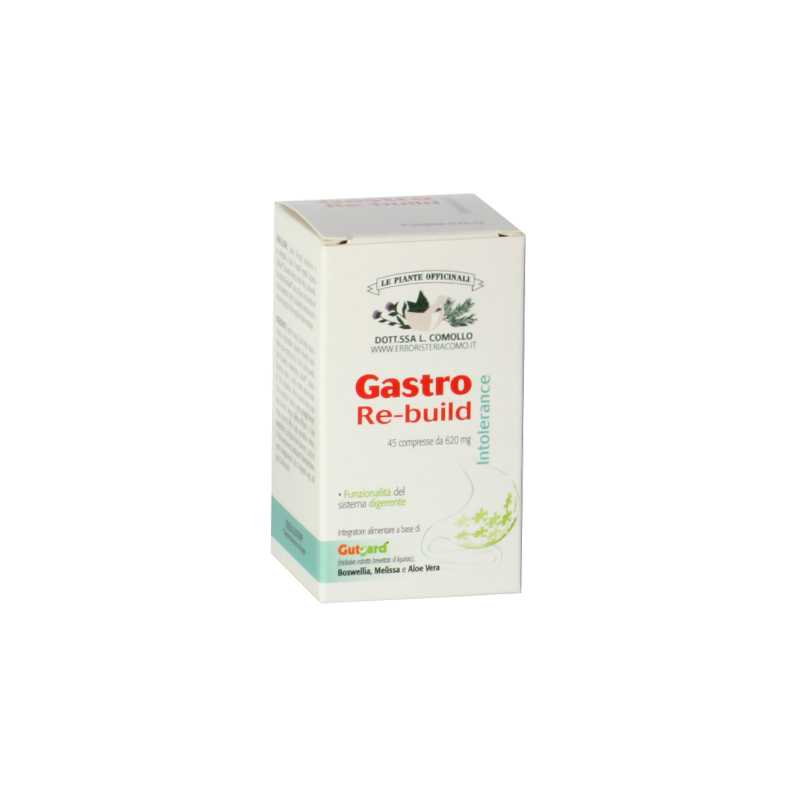